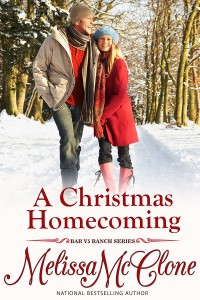 A kiss is just a kiss…

Unless it’s under the mistletoe.

Ellie Smith is determined to make up for Christmases past by spreading holiday cheer throughout the Bar V5 dude ranch, but tech “bah, humbug” billionaire, Josiah Whittaker, refuses to bask in the spirit of the season.

Unwilling to let the geek-to-gorgeous Josiah win, Ellie plans to give him a Christmas he’ll never forget. But after a simple kiss under the mistletoe, Ellie and Josiah both start questioning everything. Can Christmas really bring the gift neither one of them were expecting: true love?

A Christmas Homecoming finds us back at the Bar V5 Ranch in Marietta, Montana, one of my very favorite places to visit. Melissa has written several books taking place on this ranch and I always look forward to going back and revisiting my friends.

Ellie Smith has worked at the ranch for a year and a half. She works in housekeeping but she takes her duties more seriously than some. She wants to do whatever possible to make anyone she happens to cross paths with happy. During her childhood, Ellie had a terminally sick brother. The years her family had to deal with her brother’s illness, Ellie learned how to keep quiet. Everyone had so much to handle each and every day, she never wanted to add more. Ellie loves her job on the Bar V5, but even more than that, she loves Christmas. Ellie loves everything there is about Christmas.

Josiah Whittaker is the CEO of Whit Tech, a company he started himself that has made him a billionaire. But success didn’t come easy. Josiah works eighty hour weeks, his company is his life. Until he cut himself zip lining. It was just a small cut but he didn’t get it treated and became infected. Eventually he ended up with a serious blood infection and was hospitalized. Now, Josiah is weak and needs to recuperate, away from work. So he is ordered to the Bar V5, which is run by his friend Nate, for a month of rest. Josiah was best friends with Ellie’s ill brother back in high school and he can’t believe his eyes when he realizes that Ellie now works at the ranch. And she’s not a little girl any more. No, she’s all grown up.

The ranch is completely decked out in Christmas. Every corner of the great room is filled with Christmas cheer. But, Josiah doesn’t believe in Christmas magic. His motto is Bah, Humbug. How is he ever going to stand a month here, no cell phone, no computer, just all this Christmas cheer. Well, there is one thing he might not mind, the mistletoe, especially if he can get Ellie underneath it.

The attraction is pretty immediate but Ellie is determined that Josiah is a guest which makes him off limits. Still, the more time they spend together, the harder it gets, until the mistletoe finds them.This was a really sweet story of two people who were kind of lost, each in their own way, who together, perhaps finally found something they didn’t even realize they were missing. Ellie has a dream she has been trying to achieve for a long time now and Josiah helps to make that dream within her reach. Josiah might finally learn that there is more to him that his job. Or will he?

As always, Melissa McClone’s books leave me feeling all warm inside and always with a smile on my face. Her characters are endearing and wonderful. I have such an image in my mind of the Bar V5 Ranch and love my visits. I hope you will too.

Melissa grew up a fan of fairy tales and “happily ever afters”, but she had never read a category romance until her senior year of high school. Her A.P. English teacher, Mrs. Cooper, had the class study genre fiction and assigned each student a Harlequin Romance to read. Melissa’s story was set in the Canary Islands and she was hooked!

After graduating from Stanford University with a degree in mechanical engineering, she analyzed engine performance in Phoenix, Arizona, and read romances novels in her spare time. One day, she decided to write her own, but soon realized how little she knew about writing romances. She joined Romance Writers of America and started the long process of learning to write. A job change took her to San Francisco where she wrote during lunchtime and after work. She also met her future husband.

Six months after getting married, Melissa quit her engineering job to write full-time. That first manuscript,Fiancé for the Night, was her first sale. She was pregnant with her first child when she received “The Call.” When she was pregnant with her second child, she sold her third manuscript, The Wedding Lullaby, and signed with a literary agency. She’s represented by Annelise Robey and Christina Hogrebe at the Jane Rotrosen Agency. Her third child arrived while she was on deadline writing Santa Brought a Son. She was given an extension.