A Song for the Silence by Robert Brown – Book Review

A Song for the Silence by Robert Brown – Book Review 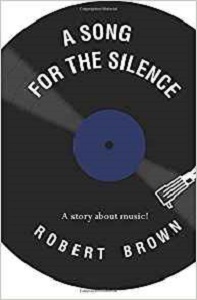 A Song for the Silence

Tommy is a fifty-something former pop star. He has lost everything and now lives with his elderly mum in South London.

When he meets Natalie, a PR guru, he sees his chance to resurrect his career. With the help of amateur songwriter, Max, they set out to make an album. This is the story of unfinished business and new beginnings.

In A Song for the Silence Robert Brown has described not only his own dreams but the dreams of thousands of wannabe hit song writers. It is a book for every amateur who has played the pub
circuits and “new band” nights, particularly those artists who wrote their own material.

It is also a book that will remind music lovers of favourite old songs as the book is littered with titles and references. Personally it reminded me of following my son and son-in-law around the pubs of North-west Kent with the occasional gig in some of the historic London venues including the Hope and Anchor, Dublin Castle and the 100 Club, the latter of which features in the book.

This is a real feel-good story; indeed at times it is extremely cheesy. I cannot help thinking that the reality of the music business is far tougher than the author has portrayed but at the end of the day Brown has set out to give us entertainment and he does that in spades.

A Song for the Silence is full of all the expected characters. We have Max, the engineering representative who wants to be a song writer; Tommy, the talented but fragile faded soul singer,
Natalie; the ambitious public relations agent, Bernie the genius producer; all of them contributing to the story.

Technically I found the text a little rough and ready with some clumsy sentences and a few grammatical errors. All things that I would expect the publishers to have ironed out. There were
also some occasions when reality was stretched, particularly the itinerary of Tommy and Lauren’s first day out together. The poor girl must have been exhausted!

But the cheese and the technical flaws did not hinder my pleasure in reading this book. After all, how could I not enjoy a book that referenced Wilson Pickett, hillwalking, a character called Clive and Crystal Palace football club. And who knows, maybe one day one of the songs written by my son or my son-in-law may surface to become an overnight hit. Yes, we can all dream and for those dreams, I am delighted to give A Song for Silence four stars.

Robert Brown was born in London in 1968. He left school with no qualifications to speak of, and has worked most of his life in the engineering industry. He first had the idea for this novel well over a decade ago but only started writing it at the end of 2015.

He has since completed work on a second book and is currently working on a third. When not writing, he enjoys listening to music, running and tries to avoid being too serious! He lives on his own in Poole, Dorset, and has two children.