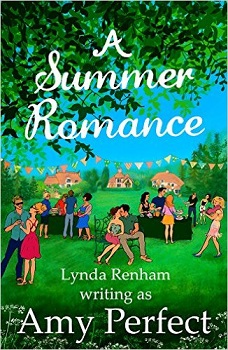 A Summer Romance is the sequel to A Village Romance and is the third book in the Little Perran series by Lynda Renham writing as Amy Perfect.

Milly settles into her new job but does her boss, Ashley Wilmot-Fox, have secrets that he is hiding in Briar Lodge? Will he be able to help Milly fight the ghosts from her past? Will Billy’s blundering romance last, and will Rafe’s secret affair be exposed?

As the villagers prepare for their summer fete they have no idea what will be revealed on that day.

A Summer Romance is the third and final book in the Little Perran series by Lynda Renham. The story continues on directly from ‘A Village Romance’, in which the book ended with the shock release of Milly’s ex-husband, Lee, from prison.

Lee doesn’t know where Milly is, but he is obsessed with her and is determined to find her, no matter who or what tries to stand in his way.

Milly is happy being Ash’s house keeper, and the two are becoming more than employer and employee. When Milly gets hurt, Ash realises how much he cares for her and offers her a room in his house to look after her. But is it more than just looking after her that Ash wants?

Stella is up to her usual nasty tricks. This time she is getting involved in other people’s relationships and trying to drive a long-term couple apart, but will Stella be more of a help than an hindrance to the pair?

Billy Baxter, the rock star, has settled into country life quite nicely, and is enjoying Cynthia’s company. Was his agent right about the quite country life doing wonders for his reputation?

Rafe is still in love with Birdie, but will the two ever be together, or is a quick tumble in the hay all they are destined for?

The final part of the Little Perran series is the best so far. I was sad to see the characters and story come to an end, although it felt right, and I was happy for all of the villagers.

I would have loved to have seen more of Frankie and Roux in this book though, as their upcoming wedding was on the horizon, but wasn’t featured.

The book creates the usual cheery, uplifting vibe that Lynda’s books give off. Alongside all the love, romance, drama and fete planning, were lots of comical moments. I especially loved the pig and dog scene!

This book also covered some serious issues, which were handled delicately and with care.

I have loved Lynda’s books for a long time as they always manage to give me a laugh, and her creative skills are superb.

This book is definitely one you should not let pass you by. You will just need to read the others in the series first as this book doesn’t work as a stand alone.

Lynda lives in Oxfordshire with her second husband and cat.

Our interview with Lynda – ‘The Writing Life of: Lynda Renham’