An Angel for Christmas by Heather Graham – Book Review

An Angel for Christmas by Heather Graham – Book Review 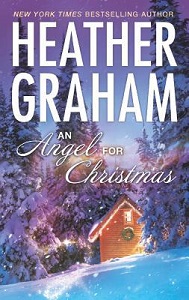 Christmas has never brought out the best in the MacDougal family. Still, year after year, they gather together in the Blue Ridge Mountains to try to make the season merry and bright.

But this year is an especially strained one, with Shayne’s impending divorce, Morwenna’s slavish devotion to work and Bobby’s reluctance to face what life has to offer. They’ve never felt less like a family.

Then, in the midst of a snowy sibling shouting match, a mysterious stranger appears. He could be a criminal, a madman or something far more unexpected. Despite their fears and the growing danger in the dark woods around them, the MacDougals take a leap of faith. But when another stranger arrives on the mountainside, they don’t know which of them to believe.

One of these men can’t be trusted. And one is about to bring Christmas into their hearts.

‘An Angel for Christmas’, centers around the MacDougal family coming together for their yearly Christmas celebration at their cabin high up in the Virginia Mountains. There are three siblings. Morwenna, the only girl, has more or less given up her dream and works in the corporate world. She is in what she thought was a good relationship with a co-worker. But when it came time for the Christmas holiday, her boyfriend insisted he had to go to Cancun with their co-workers instead of going with Morwenna to meet her family.

Shayne, the oldest son, is a doctor. He is struggling with a divorce. His two children were supposed to spend Christmas with his ex-wife but at the last minute, she allowed them to go with their father to spend the holiday at the cabin. And the youngest, Bobby, wants desperately to pursue his dream of a career in music, much to the chagrin of his family.

These three have grown apart and can’t be together for long without arguing. They hadn’t been at the cabin long when they discovered an injured man nearly frozen to death in the woods near the cabin. The man had no ID but says his name is Gabe and claims he is a cop. He said he was pursuing an escaped criminal when he was hit in the head and knocked unconscious. Can the MacDougals trust this man? He could be the criminal for all they know. And what about the safety of the children?

A terrible snow storm has hit the mountain so they allow Gabe into their home and lives. Somehow, the three siblings find themselves drawn to him and find they are able to confide things to him they haven’t been able to tell anyone else. Gabe somehow brings peace to the MacDougal family. Morwenna especially feels drawn to him.

There is still a criminal running around loose in the woods and he eventually also shows up at the cabin, claiming that ‘he’ is the cop and that Gabe is the criminal. Who do they believe? So they decide to tie them both up and after the storm passes, to walk them down the mountain to the nearest town to try to contact the authorities.

I really enjoyed this one. It was a very different sort of Christmas story. Some time is spent getting to know this family and all that is going on in their lives. But there is also suspense as we try to figure out what is really going on. Is Gabe really the cop? And there seems to be something else going on with these two men. Why does everyone seem to feel such peace around Gabe?

I always enjoy adding in children to stories and Shayne’s two kids in this book are adorable and won my heart. This was a great addition to my Christmas reading for this year and I’m so glad I added it to my list.

“Sometimes you just have to have faith.”

New York Times and USA Today best-selling author Heather Graham majored in theatre arts at the University of South Florida. After a stint of several years in dinner theatre, back-up vocals, and bar tending, she stayed home after the birth of her third child and began to write, working on short horror stories and romances.

After some trial and error, she sold her first book, WHEN NEXT WE LOVE, in 1982 and since then, she has written over one hundred novels and novellas including category, romantic suspense, historical romance, vampire fiction, time travel, occult, and Christmas holiday fare. She wrote the launch books for the Dell’s Ecstasy Supreme line, Silhouette’s Shadows, and for Harlequin’s mainstream fiction imprint, Mira Books.

Heather was a founding member of the Florida Romance Writers chapter of RWA and, since 1999, has hosted the ‘Romantic Times Vampire Ball’, with all revenues going directly to children’s charity. She is pleased to have been published in approximately twenty languages, and to have been honoured with awards from Waldenbooks. B. Dalton, Georgia Romance Writers, Affaire de Coeur, Romantic Times, and more.

She has had books selected for the Doubleday Book Club and the Literary Guild, and has been quoted, interviewed, or featured in such publications as The Nation, Redbook, People, and USA Today and appeared on many newscasts including local television and Entertainment Tonight.

Heather loves travel and anything have to do with the water, and is a certified scuba diver. Married since high school graduation and the mother of five, her greatest love in life remains her family, but she also believes her career has been an incredible gift, and she is grateful every day to be doing something that she loves so very much for a living.