At the Wedding by Matt Dunn – Book Review

At the Wedding by Matt Dunn – Book Review 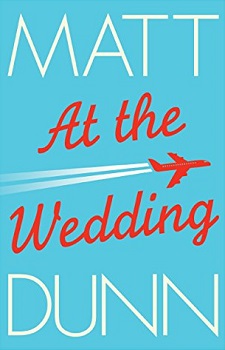 Livia’s been planning her wedding to Jed for ages. Now, at the venue in beautiful Barcelona, with her dress pressed and the guests all on their way, she’s only left one tiny detail until the last minute: letting the groom know he’s about to get hitched.

But as far as Jed’s concerned, they’ve been bumping along just fine for ten years and even have a baby on the way, so why spoil things with an ‘I do’? Especially when he’d really rather not.

Meanwhile the guests are arriving with plenty of baggage of their own. Fading reality star Liam’s still on the lookout for a plus-one; Rachel’s has refused to come—and dumped her into the bargain; and divorcee Patrick’s date is more of the ‘mid-life crisis’ variety.

But as the ceremony approaches, and with no sign of Jed, there’s only one thing on all of their minds: will there be a bride and groom at the wedding?

Livia is six-months pregnant and decides that she wants to get married, the trouble is her unsuspecting partner Jed hates the idea of marriage so she tricks him into going to Barcelona on a last minute deal so they can spend some time together before the baby comes.

What she ‘forgot’ to tell Jed was that she had invited his brother and their friends along too and that she had arranged for them to get married whilst they were there.

At first, Jed is shocked, then he tries to get along with the idea, that is until he thinks too much about it and goes off for a jog to clear his head – but will he keep on running?

I’ve read a few books by Matt Dunn and they have all managed to make me laugh-out-loud and put a smile on my face and this book was no different. There was a real mixture of characters and at times it felt like they could have fitted into ‘The Hangover’ movie – just less crude.

As Livia is pregnant she wants some protection and she believes that come in the form of marrying her longtime boyfriend. They have been together for ten-years but Jed had a very unhappy childhood and blamed his father for most of it. He saw how unhappy his mother was and doesn’t want to go down the same path so he swore not to get married as he is scared of turning into his father.

As well as the possible bride and groom we meet Livia’s friend Rachel who has turned up in Barcelona newly single and ready to start living her life again. There is also Patrick and his much younger new girlfriend Izzy who seems to think he has an endless stash of money in his wallet. Then there is womaniser Liam – Jed’s brother. He certainly likes the ladies, any ladies, he’s not fussy. He’s also been on a reality TV show and thinks that he is a major star.

The plot takes place over the course of just two days and follows all of the characters as they lead up to the, ‘will they, won’t they’ moment of marriage. At the Wedding was a lot of fun, even if I disagreed with Livia’s actions. You can’t force someone to marry you, even if you have been together for a decade and are having a baby together. It has to be a joint decision. See, I even got emotionally involved with the story too!

As well as eleven novels, I’ve also written about life, love, and relationships for the likes of The Times, Guardian, and The Sun, along with a number of magazines including Cosmopolitan, Company, Elle, and Glamour.

You can find out more about Matt over on ‘The Writing Life of: Matt Dunn’