Thailand, 1943: Thomas Ellis, captured by the Japanese at the fall of Singapore, is a prisoner-of-war on the Death Railway. In stifling heat he endures endless days of clearing jungle, breaking stone and lugging wood. He must stay alive, although he is struck down by disease and tortured by Japanese guards, and he must stay strong, although he is starving and exhausted. For Tom has made himself a promise: to return home. Not to the grey streets of London, where he once lived, but to Penang, where he found paradise and love.

London, 1986: Laura Ellis, a successful City lawyer, turns her back on her yuppie existence and travels to Southeast Asia. In Thailand and Malaysia she retraces her father’s past and discovers the truths he has refused to tell her. And in the place where her father once suffered and survived, she will finally find out how he got his Bamboo Heart.

In a blend of stirring fiction and heart-wrenching history, Ann Bennett narrates the story of a soldier’s strength and survival in the bleakest of times and a daughter’s journey of discovery about her father and herself.

Juliet Crosby has lived a reclusive life on her Malayan rubber plantation since the Second World War robbed her of everyone she loved.

However, the sudden appearance of a young woman from Indonesia disrupts her lonely existence and stirs up unsettling memories. Juliet is forced to recollect her prewar marriage, her wartime ordeals in Japanese-occupied Singapore and the loss of those she once held dear. 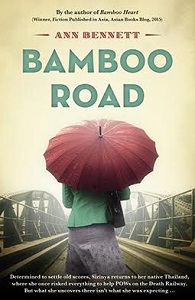 Thailand 1942: Sirinya and her family are members of the Thai underground, who risk their lives to resist the World War Two Japanese occupation and to and help British prisoners of war building the Thai-Burma railway.

The events of those years have repercussions for decades to come. The book tells Sirinya’s wartime story and how in the 1970s she returns to Kanchanaburi after a long absence abroad, to settle old scores from the war years.

Bangkok, the city that never sleeps, is the setting for several scenes in ‘Bamboo Road’ and one or two in ‘Bamboo Heart’. It is the sort of place that gets under your skin. It can be overwhelmingly frenetic, but in its backstreets (or sois), and in its many temples there are pockets of calm and timeless charm.

On my first visit in 1985 I stayed in a budget hotel, The Swan, right next to the great Oriental Hotel on the river Chao Phraya. This hotel with its run-down rooms and unassuming style was the setting for the place where Sirinya stays in 1970 (in ‘Bamboo Road’), which in the book I have named ‘the Golden Key.’ I used the streets around it as the setting for Lian’s house in that book. The name actually comes from a similarly down-market establishment in Hanoi.

On that 1985 trip, our tour guide took us to the flesh pots of seedy Patpong Road. Then they were a lot less touristy than they are today, where girls pole dance on bars and sit on customers’ laps flattering them into heavy spending. In those days tragically young women would sit in shop windows on tiered seating with numbers displayed on their skimpy costumes so customers could choose easily. That trip was the inspiration for several scenes in Bamboo Road.

The Chao Phraya river is a main thoroughfare in Bangkok and the most interesting places to stay are on its banks. I never tire of watching the river traffic ply to and fro; convoys of rice barges on which families cook, play and dry their washing pulled by sturdy tugboats, river taxis and buses, transporting crowds of commuters along the river, and the ubiquitous, colourful, long-tail boats powered by lorry engines belting out smoke and noise.

Taking a long-tail boat on a trip through the klongs, or canals, through communities of houses built on stilts, past temples and markets, is a fascinating experience. There are many impressive temples along the river, with their elaborate roofs and gold leaf buddhas. The Temple of the Dawn, or Wat Arun, at the junction where one of the main canals emerges into the river, is my favourite and I used it as a setting in Bamboo Road. Wat Arun is covered in floral mosaics made of broken china, which make it glitter and shimmer in the light of dawn.

In Bangkok’s Chinatown you can lose yourself in the bustling alleyways amongst street stalls and gold shops. Every type of prodcut is sold there from wet fish to plumbing parts, and once in a while amongst the hubub you might chance upon the entrance to a temple. It is where Sirinya wanders in Bamboo Road, past coffin makers and down narrow alleyways to the silk merchant’s shop, and towards a chance encounter.

Ann Bennett was born and raised in a small village in Northamptonshire, UK. She read Law at Cambridge and qualified and practised as a solicitor.

During a career break, to have children, she started to write. Her father had been a prisoner of war on the Thailand– Burma Railway and the idea for a Southeast Asian WWII trilogy came from researching his wartime experiences. The research took her back to Asia, a place she loves and has returned to many times.

She lives in Surrey with her husband and three sons and works in London as a lawyer.