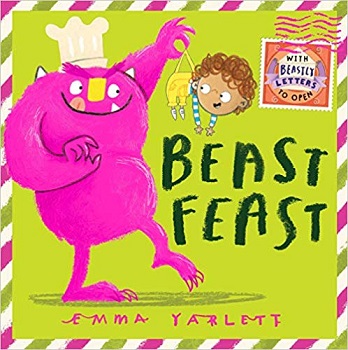 Beast has found a tasty dinner, and he’s written to all his friends to invite them to a feast. Unfortunately, Dinner is a child who very much does not want to be eaten.

As Beast’s friends send their instructions for cooking Dinner, is there any way Dinner can convince Beast to change his menu? A vibrant and charming interactive book with hilarious letters to open.

One day Beast caught something tasty for his dinner, a little boy, who he called ‘Dinner’. He was so excited about eating the little boy that he decided it would be perfect to share him with his friends, so he wrote to them inviting them to his dinner party.

Over the next few days, Beast realised that he was having a lot of fun with ‘Dinner’ and that he didn’t want to eat him anymore, but his friends were coming and he didn’t know what to do as they would be angry if he didn’t serve ‘Dinner’ to them.

Beast Feast is an entertaining and thoroughly enjoyable children’s book about a Beast and his upcoming feast, in which he intends to serve up a little boy. However, the little boy is very crafty and makes the beast become his friend.

The book has amazing, colourful illustrations throughout that capture the story perfectly and also includes letters to open from Beasts friends.

The story is beautifully told and although it might feature a beast wanting to eat a small child there is nothing in the book to be afraid of. I can see this being a book that children want to read over and over as well as giggle along with.

It would make a great read for the upcoming Halloween, although it is a book that will be enjoyed at any time of the year.

Emma Yarlett is an award-winning author, illustrator and typographer.

Emma’s bestselling book series Nibbles has sold over half a million books across five continents, won numerous awards and accolades and has nibbled it’s way onto the bookshelves and imaginations of children across the world. Emma’s self-penned picture books Orion and the Dark, Sidney Stella and the Moon and Poppy Pickle have also achieved global success, won numerous awards and been adapted into theatrical plays and other media.

Emma studied illustration at Falmouth University and graduated with first class honours in 2011. She began work on her first self-penned picture book Sidney, Stella and the Moon whilst still studying at university.

Emma now lives in Falmouth, Cornwall with her husband Alex.