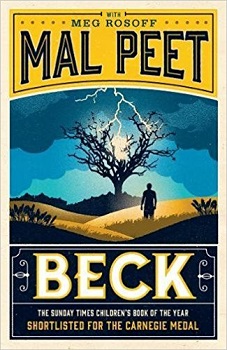 The final novel from Carnegie Medal-winning author Mal Peet is a sweeping coming-of-age adventure, with all the characteristic beauty and strenth of his prose. Both harrowing and life-affirming adventure of a mixed race boy transported to North America.

Born from a street liaison between a poor young woman and an African sailor in the 1900s, Beck is soon orphaned and sent to the Catholic Brothers in Canada. Shipped to work on a farm, his escape takes him across the continent in a search for belonging. Enduring abuse and many hardships, Beck has times of comfort and encouragement, eventually finding Grace, the woman with whom he can finally forge his life and shape his destiny as a young man.

A picaresque novel set during the Depression as experienced by a young black man, it depicts great pain but has an uplifting and inspiring conclusion.

Liverpool 1907, Anne Beck had just been sacked from her job. On her way home Anne passed a black man stood outside the local pub, as the landlord had refused to serve him. His white shipmates had bought him a drink and a bite to eat, this is what lured her towards him.

When he was eleven years old, his mother caught the flu and subsequently died, meaning that Beck was sent to a Catholic orphanage.

Over the coming years Beck was treated harrowingly. Starting off in Canada, where him and a few of his orphanage friends were sent to stay with priests until the time would come for them to find new homes.

Filled with anger and mistrust, did Beck ever get out of the cycle of hardship and cruelty, to become a man who was capable of love, and a happy ending?

Firstly, I need to give potential readers a warning. This book has been marked as a Young Adult book, but with graphic scenes of violence, plus emotional, and sexual abuse, I would say this book is not suitable for those under 16. Yes, it is a story true to life and these things happen, but it does leave images in your head, that even I at 39 years old I could not shift for a few days.

The book does have you thinking about life and the hardships that black people endured, having been deemed second class citizens and looked down on by society. Beck himself though is a mixed bag, his story is filled with emotion, but at times the writing was a little lacking, meaning that I didn’t always connect with him.

The book takes you to some dark places, and yet at times also gives you an uplift. It is thought-provoking, and tough to read in parts, but if you get the chance, I feel that this is going to be one of those books that in the future will become a modern day classic.

Mal Peet grew up in North Norfolk, and studied English and American Studies at the University of Warwick. Later he moved to southwest England and worked at a variety of jobs before turning full-time to writing and illustrating in the early 1990s. With his wife, Elspeth Graham, he had written and illustrated many educational picture books for young children, and his cartoons have appeared in a number of magazines.