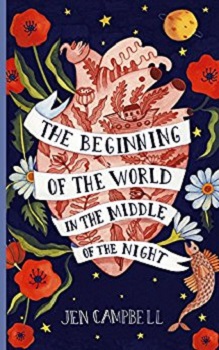 The Beginning of the World in the Middle of the Night

Spirits in jam jars, mini-apocalypses, animal hearts and side shows.

A girl runs a coffin hotel on a remote island.

A boy is worried his sister has two souls.

A couple are rewriting the history of the world.

And mermaids are on display at the local aquarium.

The Beginning of the World in the Middle of the Night is a collection of twelve haunting stories; modern fairy tales brimming with magic, outsiders and lost souls.

Jen Campbell’s new book, The Beginning of the World in the Middle of the Night, is a collect of 12 short stories. These are not just any short stories, though, they are very weird, yet surprisingly addictive. They also contain lots folklores and facts thrown in for good measure, like the first story telling you about the different types of swans there are.

I wasn’t quite sure how I was going to actually get on with the book, as the first story was completely strange. It is about a woman who orders a heart, a swan heart, that arrives via the post. The world isn’t loving enough so people’s hearts are dying, and they need to have them replaced; animal hearts are the new heart replacements. As I sad, baffling, though I did understand the concept behind the story.

I like short stories, I like the fact that I can pick up a book and within a short space of time I have read a full story. They are also quite fast paced as the stories don’t have the word count to ebb and flow.

Apart from being strange, the stories are all quite dark too. They are thought-provoking and at times take some concentration. The Beginning of the World in the Middle of the Night is a fantastic read, one that I would highly recommend.

Jen is also the author of the Sunday Times bestselling Weird Things Customers Say in Bookshops series, and The Bookshop Book. Her poetry pamphlet The Hungry Ghost Festival is published by The Rialto, and her collection in progress, the girl aquarium, won an Eric Gregory Award in 2016.

Jen worked as a bookseller for ten years and now runs a Youtube channel, where she talks about all things books. She is currently a judge for this year’s Somerset Maugham Award. She grew up in the north east of England and now lives in London.