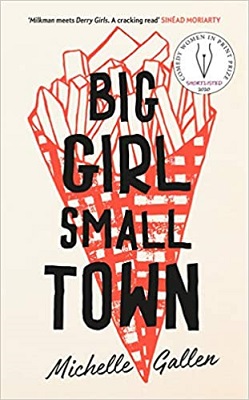 Routine makes Majella’s world small but change is about to make it a whole lot bigger.

Other people find Majella odd. She keeps herself to herself, she doesn’t like gossip and she isn’t interested in knowing her neighbours’ business. But suddenly everyone in the small town in Northern Ireland where she grew up wants to know all about hers.

Since her da disappeared during the Troubles, Majella has tried to live a quiet life with her alcoholic mother. She works in the local chip shop (Monday-Saturday, Sunday off), wears the same clothes every day (overalls, too small), has the same dinner each night (fish and chips, nuked in the microwave) and binge watches Dallas (the best show ever aired on TV) from the safety of her single bed. She has no friends and no boyfriend and Majella thinks things are better that way.

But Majella’s safe and predictable existence is shattered when her grandmother dies and as much as she wants things to go back to normal, Majella comes to realise that maybe there is more to life. And it might just be that from tragedy comes Majella’s one chance at escape.

Majella lives in a small Northern Irish town called Aghybogey. She lives with her mum who is an alcoholic. Her dad disappeared years ago during the troubles and her Granny has just been murdered.

Majella is autistic, though she doesn’t know it. She has a set routine every day. She doesn’t like change, squeaky shutters, gossip, bright lights. In fact, she doesn’t like a lot of stuff, which she notes writes down in categories and sub-catogories and gives them all an id number. She does however like watching Dallas re-runs, painkillers, eating, and sex.

Big Girl, Small Town is an unusual book in that not much happens throughout. It is written in day and time format and each time period is given a title and an id number that corresponds to Majella’s does or does not like list. Such as Wednesday – 6.47pm. Item 7: Sweating. The book is told over the course of one week, the week after Majella’s Granny was murdered.

I found the writing style quite hard to understand at the beginning as it is written in Irish dialect (Quarter tae four. ah’m gonna head on, fer ah’m in at four). Being from the North of England some of the words were known to me, others I didn’t have a clue what Majella was saying, so I have possibly missed some of the plot due to a lack of understanding of some sentences. However, I did find Majella’s Irish voice in my head after a while which was interesting.

Although as stated above nothing really happens except a normal(ish) week in Majella’s life I was surprisingly interested and intrigued and enjoyed the book. Majella is a complex character who lives a complex life. She is emotional and has routines for helping her cope with her emotions and to make herself feel better. Whilst she doesn’t understand jokes, nor like them the book does have some humour and mainly coming from Majella, though she wouldn’t realise it.

Growing up on a Cul De Sac where everyone knew everyone’s business and the adults used to have parties on the street quite often and be in each other’s houses, I could understand Majella’s hatred of people knowing her business and frustration with people prying into her life, even if most were just wanting to pass on their condolences about her Granny.

It might only be one week, but this is the week that Majella learns that there may be more to life than she is currently experiencing and that change can happen in the most unlikely and horrific circumstances.

Michelle Gallen was born in Tyrone in the 1970s and grew up during the Troubles a few miles from the border. She studied English Literature at Trinity College Dublin and Publishing at Stirling University. She has had work published in the Stinging Fly, Mslexia and others and won the Orange/NW Short Story Award.

What did you think of Big Girl, Small Town? Share your thoughts in the comment section below!