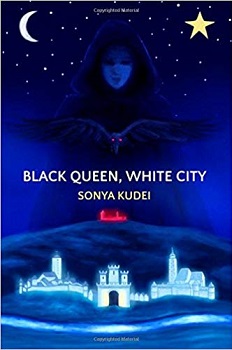 Leo Solar is a star daimon, a celestial being with powers so vast that he can literally blow up a sun (but not in a bad way – it’s all perfectly safe). This is why when he gets sent to Earth, more specifically, his least favorite part of it (Zagreb, Croatia) with curtailed powers to undertake a dangerous frustrating mission, he is not the happiest star daimon in town.

Dario is a twenty-something former Zagreb University student whose search for meaning is continuously thwarted by the demands of his eccentric landlady. After he meets a mysterious stranger who goes around town battling monsters from the Underworld, Dario’s life suddenly takes an interesting turn, and he soon finds himself caught in a flurry of action that includes the celestial realm above, a hidden magic realm below and the erstwhile ordinary Zagreb somewhere in between.

The Black Queen is a legendary 15th century personage who not only continues to captivate the imagination of the residents of Zagreb, but apparently also plots to captivate the city itself (literally) despite being somewhat dead.

The White City is a quiet picturesque town with a thrilling secret history. Some people call it Zagreb.

The Celestial Realm (a.k.a. “outer space”) is a place where star daimons with enormous powers and questionable hairstyles perform valiant deeds in order to maintain the balance of the universe while engaging in petty inter-stellar squabbles and meddling with the affairs of Earth.

All of these people, places and fictional constructs come together in an action-packed culmination on October 31, i.e. the Night of the Witches.

‘Black Queen, White City’ is a contemporary YA fantasy novel by Croatian-born author, Sonya Kudei. The story is divided into three parts, spanning about six weeks, from late September to the end of October and is written in the third person from the perspectives of several different characters. As with any good fantasy, we have an evil witch with heinous powers and nasty sidekicks, pitted against a slightly flawed celestial being, who has been sent to earth to save its inhabitants.

I struggled to engage with the story for the first few chapters but the physical descriptions of the characters and the ironic writing style were definite positives. I became slightly bogged down with Madam Mina‘s carpet and also wondered why it was necessary for Leo to pop off into the ether to destroy an ageing sun. I’m still not sure if these threads were padding or if the author was attempting to flesh out her main protagonists.

I was heartened by the appearance of the raven which ran amok at the Ditch because this moved the story forward. Unfortunately, it then lost momentum when we joined Dario in the supermarket pushing Madam Mina’s shopping trolley. I would have liked far more from the Black Queen to heighten the tension and menace of what was to come. For me, she never quite fulfilled her potential.

At about a third of the way through, we get a significant amount of backstory which helps anchor the plot and the structure became tighter and more purposeful thereafter. I particularly liked the author’s use of similes and foreshadowing and, by half way, was definitely keen to find out how good would overcome evil in this particular scenario.

There are some vivid descriptive passages, along with solid performances from the main players and some nice cameos from the supporting cast; I felt particularly sorry for the tram fairies and Rudi definitely touched my heart. The climax was a bit frantic with lots of very short scenes as we flitted between our struggling heroes but somehow, I think we always knew what the outcome would be.

It was a nice touch to base the tale in Zagreb, a city with which I am unfamiliar and I enjoyed learning a bit more about its history. I believe this book will be received well by its target audience but as to whether it has anything to significantly elevate it above its competitors in a hugely popular genre, is questionable. After a sticky start, it is an interesting tale with a few quirky elements and I award three-and-a-half stars.

Born in Zagreb in 1981, Sonya Kudei has been writing fiction since she was about six. Once (or maybe twice) in the mid or late ‘90s, she was awarded first prize in the junior short story competition at the annual Zagreb SciFi convention. Although her memory of the stories has subsequently become a bit vague, she is fairly certain they featured either radioactive aliens or giant killer plants or possibly both.

She studied English Language and Literature (BA) and Cognitive Linguistics (MA) as well as dabbling with classical studies, Germanic languages, philosophy and art history, among other things. She has worked as a graphic/web designer, illustrator, journalist, subtitle translator, editor, teacher, product manager and (very briefly) tourist guide in Venice. In addition, she was a web developer in London for over five years.

Sonya is also a painter, with a penchant for Early Renaissance art, and a keen practitioner of obscure 15th century painting techniques, some of which involve eggs. Occasionally she draws comics.

Currently based in St Albans, England, she has been living in the UK for over ten years.