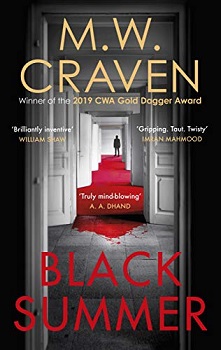 After The Puppet Show, a new storm is coming . . .

Jared Keaton, chef to the stars. Charming. Charismatic. Psychopath . . . He’s currently serving a life sentence for the brutal murder of his daughter, Elizabeth. Her body was never found and Keaton was convicted largely on the testimony of Detective Sergeant Washington Poe.

So when a young woman staggers into a remote police station with irrefutable evidence that she is Elizabeth Keaton, Poe finds himself on the wrong end of an investigation, one that could cost him much more than his career.

Helped by the only person he trusts, the brilliant but socially awkward Tilly Bradshaw, Poe races to answer the only question that matters: how can someone be both dead and alive at the same time?

And then Elizabeth goes missing again – and all paths of investigation lead back to Poe.

On the fourth Wednesday of every month ‘problem-solving officer,’ Graham Alsop resides in the library in the village if Alston, Cumbria. The local police station closed in budget cuts and now just one day a month the residents of the village can see Officer Alsop to tell them any problems that have occurred in the last month.

Whilst attending his post a young woman, muddy and undernourished wanders into the library, apprehensive at first she approached Officer Alsop’s desk and tells him she was kidnapped six years ago and held captive until she recently managed to escape, she gives her name as Elizabeth Keaton.

Detectives are soon called in and DS Sergeant Poe is asked to return to Cumbria from London as a matter of urgency. Upon his arrival he is questioned about Elizabeth Keaton who went missing six years earlier and her father, celebrity chef Jared Keaton charged with her murder, for which Poe was the lead officer.

Poe is flabbergasted. The woman looks like Elizabeth and the DNA from her blood proves she is Elizabeth but Poe still isn’t convinced. With the help of his loyal team, including Crime Analyst Tilly can Poe prove he was right all those years ago or is he just going to have to come to terms with the fact that he messed up Elizabeth’s missing person case and put an innocent man behind bars?

After the spectacular first book in the series, ‘The Puppet Show’ comes this outstanding novel ‘Black Summer’ featuring the Cumbrian DS Poe and the wonderful Tilly. I was looking forward to reading more about Poe and the introduction had me on the edge of my seat, I knew this was a book I wasn’t going to be able to put down as it was already dark and foreboding.

DS Poe is a man who goes with his gut. He’s been in the police force for a long time and it was his gut feeling that brought the killer down in the first book, so surely he couldn’t have been wrong about Jared Keaton, all the evidence suggests he killed his daughter, but now his daughter is here and Poe doesn’t know what to think. He’s conflicted but he is also doesn’t want a guilty man being released from prison without some thorough checks, even Elizabeth’s DNA isn’t enough for Poe.

This is a book that plays with your mind if you have read the first book you will understand and know how Poe works, so how could he have been so wrong about Elizabeth. However, you also feel as if you are on tenterhooks waiting for the confirmation on whether this is really her or not and if it is who took her and why.

The book will have you guessing trying to figure out the pieces yourself and doubts about Poe and his initial investigation do creep in as well as doubts about Elizabeth too. It often felt like I was part of the team and working alongside them to solve the mystery. Gosh, I even made notes.

If you love crime thrillers then this is a series to read. It keeps you on your toes and has an amazing cast of characters as well as set in a beautiful part of the UK. With the third book, The Curator, coming out soon, I can’t wait to meet Poe and the team again.

M. W. Craven was born in Carlisle but grew up in Newcastle, running away to join the army at the tender age of sixteen. He spent the next ten years travelling the world having fun, leaving in 1995 to complete a degree in social work with specialisms in criminology and substance misuse. Thirty-one years after leaving Cumbria, he returned to take up a probation officer position in Whitehaven, eventually working his way up to chief officer grade. Sixteen years later he took the plunge, accepted redundancy and became a full-time author. He now has entirely different motivations for trying to get inside the minds of criminals . . .

The Puppet Show, the first in a two-book deal he signed with the Little, Brown imprint, Constable in 2017, was released to critical acclaim in hardback in 2018. It has been sold in numerous foreign territories and the production company Studio Lambert, creators of the award-winning Three Girls, have optioned it for TV. The sequel, Black Summer, followed in June 2019.

M. W. Craven is married and lives in Carlisle with his wife, Joanne. When he isn’t out with his springer spaniel, or talking nonsense in the pub, he can be found at punk gigs and writing festivals up and down the country.