The Bobbling and the Flood by Inger Brown – Book Review

The Bobbling and the Flood by Inger Brown – Book Review 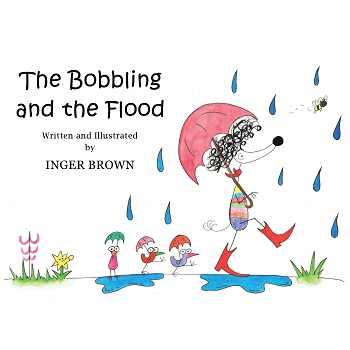 The Bobbling and the Flood

In fact, it rained so much that it flooded his house, and his garden, and all the land around! As far as Bobbling could see, the water stretched over the ground.

Bobbling decided something had to be done, so he set off in his umbrella to search…

… he was searching for the plug hole.

Bobbling Poodle Doodle wasn’t very happy. It was raining and it didn’t seem to be stopping. He wanted it to stop.

The rain got heavier and then started coming through the roof of his house. There was so much water that it flooded his house so he had to leave. He had an idea though. He was going to use an umbrella as a boat and go and find the plug so that he could drain all the water away and get his home back.

But where was that plug?

This is a fun, short children’s book that was a joy to read. It has been beautifully illustrated by the author with images that will have you laughing, especially the expressions from the animals.

The story is cleverly written and will have children wondering if there really is a plug to drain away the rain, or if they could use an umbrella as a boat.

Inger Brown was born in Cornwall and grew up in Somerset where she attended Westcliff Art College. After she completed college she specialized in writing and illustrating stories for children and creating her unique characters which are influenced by animals and the countryside.

Inger is also a glass bead artist and has designed many individual pieces of jewellery. Inger is currently working on many more adventures for her character the Bobbling.