Body of the Crime by Jennifer Chase – Book Blast

Body of the Crime by Jennifer Chase – Book Blast 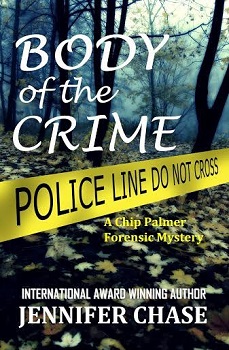 From the award-winning author of the Emily Stone Series, comes a new kind of forensic hero:

The District Attorney’s Serial Special Task Force retains the help of the reclusive Dr. Chip Palmer, a forensic expert and criminal profiler, to steer them in the right direction. Palmer is known for his astute academic interpretations of serial and predatory crimes, along with his unconventional tactics that goes against general police procedures. He is partnered with the tough and beautiful D.A. Inspector Kate Rawlins, a homicide detective transplanted from Phoenix, and the chemistry ignites between the team—both good and deadly.

The Flower Girl Murders leaves three homicides, five cold cases, two seasoned detectives, three suspects, and one serial killer calling all the shots. The investigation must rely on one eccentric forensic scientist to unravel the clues to solve the case. But at what cost?

THE DENSE PINE AND OAK trees made a semi-circle pattern in the forest. Dried leaves blew in the breeze, swirled around like unique pieces of confetti, cascading downward, and finally resting on the ground.
The isolated location seemed serene and picturesque, which lent to the stark contrast of the woman’s dead body.
Her long brown hair hung straight and spilled down over her shoulders and slender body. Each strand appeared to have been carefully washed and combed precisely in place. The unknown woman wore a light blue button-down sweater that remained in an orderly fashion with every button fastened, and it was pulled down to cover her belly. Her arms gently placed over her chest, each finger laced next to the other. Tucked carefully underneath her hands was a stem with a pale pink flower that looked like a daisy, now wilted. The victim’s fingernails scrubbed clean, and her hands lacked any jewelry or identifying marks.
Upon a quick glance, it seemed that she was merely daydreaming. Looking closely, her fixed dull eyes gave the undeniable lifeless gaze. The relaxed expression on her face seemed almost contrived and had a peculiar quality to it—even a ghostly facade.
From the waist up, the woman looked like she had taken a nap after a morning of running errands or after coming home from a luncheon with friends. The woman was in a carefully posed position that told the story of an organized killer who was in complete control, but that was where the structured behavior of the murderer abruptly stopped.
In a disturbing contrast, the horrifying viciousness of what was left of the bottom half of the body was the aftermath of a long, torturous assault from someone completely out of control. It suggested a perpetrator who lacked any impulse control and mental stability.

Jennifer Chase is an award-winning author and consulting criminologist. She has authored six crime fiction novels, including the multiple award-winning Emily Stone thriller series along with a screenwriting workbook.

Jennifer holds a Bachelor degree in police forensics and a Master’s degree in criminology. These academic pursuits developed out of her curiosity about the criminal mind as well as from her own experience with a violent sociopath, providing Jennifer with deep personal investment in every story she tells.

In addition, she holds certifications in serial crime and criminal profiling. She is an affiliate member of the International Association of Forensic Criminologists.