Whose World, Jason’s or Agnes’s by Joe Treasure

The Book of Air by Joe Treasure – Whose world, Jason’s or Agnes’s – Guest Post

Raised sixth in a family of nine, Joe Treasure enjoyed a capriciously Bohemian childhood. Having received his educational grounding at the hands of Carmelite priests, he escaped to Cheltenham Grammar School where he excelled only in music and art. His architectural ambitions were thwarted by low grades in maths and physics. The local college of further education allowed him to pursue more congenial subjects, after which he surprised everyone, not least himself, by winning a place to read English at Keble College, Oxford.

Settling in Monmouth, Wales, Joe taught English and ran an innovative drama programme. He moved to Los Angeles at the turn of the millennium to join his wife, Leni Wildflower. Temporarily unemployed, he set about fixing up Leni’s house and turned to writing fiction.

In 2004, at the end of George W Bush’s first explosive term in office, they relocated to London where Joe studied creative writing at Royal Holloway. He wrote The Male Gaze, a novel that drew on his American experience, mingling social comedy with political drama. Offered a two-book publishing contract with Picador, he went on to explore the divided loyalties of an Anglo-Irish family in Besotted, a novel that celebrates the enduring bonds of brotherhood.

The Book of Air is Joe’s first venture into speculative fiction. He and Leni currently live in Balham, London.

Guest Post – Whose world, Jason’s or Agnes’s, would you prefer to live in and why?

What a great question. In all the time I’ve been working on The Book of Air, I’ve never thought to ask myself this. Now I’m going to have to think my way towards an answer.

Jason goes through some powerfully traumatic experiences that I wouldn’t wish on anyone. By the time he begins to tell his story, he’s already lost almost everything, including his successful life in London. His wife is dead. And yet, as he acknowledges himself, these losses are trivial compared with the existential losses suffered by the human race. With most of population killed by a strange and terrifying epidemic, most of what constitutes human culture is in ruins. We pretty much know all this after the first few chapters, by the way, so this isn’t a spoiler.

How all this has happened and how it has played out from Jason’s perspective, we learn as the book goes on. Between filling us in on the backstory, which is a kind of thriller in itself, a substantial part of Jason’s narrative is about how he moves forward from this. Once he’s escaped from the chaos of London, he’s thrown into the company of half a dozen strangers, other survivors. Inevitably there are conflicts and for a while it isn’t clear what sort of pattern things will fall into.

As I think about this now, I’m reminded of why I wrote it in this order, starting with Jason at the lowest point. To tell the whole story chronologically would have been too hard – emotionally hard. I wanted to balance all that loss with the building of something new, as Jason’s group of survivors struggle towards a new system for living that builds on what they’ve got. This doesn’t happen without considerable peril for Jason and others. But I wanted his part of the book, from early on, to begin moving towards the possibility, at least, of a hopeful outcome.

It’s important that, while the human population is massively reduced, the rest of nature is unharmed. Jason’s old house in the Welsh countryside, surrounded by woods and farmland, is a kind of Eden into which the people bring their troubles and their hostilities and their weaknesses, as people will.

This is the same environment that Agnes inhabits a few hundred years into the future. The villagers, descendants of Jason and his contemporaries, form an isolated society that has evolved into a very particular and in some ways quite peculiar form. The farming is recognisable. They manage livestock and grow crops in pretty much the way people have since prehistoric times. But their human structures have taken a form that’s radically different from anything we know.

At the heart of this are the books they’ve inherited. There are only a few. The most substantial of them is Jane Eyre. This is a great novel, but we know it’s only one of hundreds of great novels, and it’s one of millions of novels, good and bad, that have ever been written. For them, though, it’s both unique and uniquely precious – an unmatched source of wisdom and guidance. They have no context for it and no concept of fiction. This doesn’t mean they just take it literally. They do, but they understand it on other levels as well – for example, as a metaphorical account of the clash of elements that all life depends on, and also as a moral roadmap. During the course of Agnes’s story, people are married or buried. They’re punished or they come of age. And Jane Eyre has influenced the way all these things are done.

The scope of Agnes’s life is extremely narrow by our standards. Until she leaves the village to escape punishment, she has experienced nothing beyond its tight limits and then she finds mainly danger and disorder. But she also learns that there are many ways to live. The story she tells is a struggle towards liberation – to free herself both from physical oppression and from the mental straitjacket that her upbringing has put her in. In this process, she glimpses the possibility of freedom for the rest of her village if they’re willing to grasp it.

For this reason, I would have to choose Agnes’s world over Jason’s. His world is shaped by loss. Human society has shrunk to little pockets of existence. For Agnes, things are beginning to open up and we see the first stirrings of fresh growth. 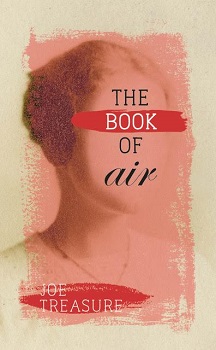 Retreating from an airborne virus with a uniquely unsettling symptom, property developer Jason escapes London for his country estate, where he is forced to negotiate a new way of living with an assortment of fellow survivors.

Far in the future, an isolated community of descendants continue to farm this same estate. Among their most treasured possessions are a few books, including a copy of Jane Eyre, from which they have constructed their hierarchies, rituals and beliefs.

When 15-year-old Agnes begins to record the events of her life, she has no idea what consequences will follow. Locked away for her transgressions, she escapes to the urban ruins and a kind of freedom, but must decide where her future lies.

These two stories interweave, illuminating each other in unexpected ways and offering long vistas of loss, regeneration and wonder.

The Book of Air is a story of survival, the shaping of memory and the enduring impulse to find meaning in a turbulent world. 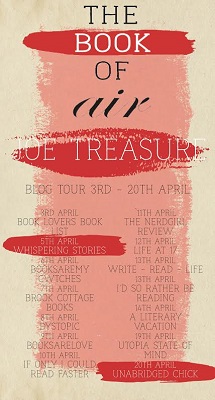