A Boy Made of Blocks by Keith Stuart – Book Review

A Boy Made of Blocks by Keith Stuart – Book Review

Discover a unique, funny and moving debut that will make you laugh, cry and smile.

Meet thirtysomething dad, Alex
He loves his wife Jody, but has forgotten how to show it. He loves his son Sam, but doesn’t understand him. Something has to change. And he needs to start with himself.

Meet eight-year-old Sam
Beautiful, surprising, autistic. To him the world is a puzzle he can’t solve on his own.

But when Sam starts to play Minecraft, it opens up a place where Alex and Sam begin to rediscover both themselves and each other . . .

Can one fragmented family put themselves back together, one piece at a time?

Eight year old Sam is autistic. After years of drifting apart, his mum Jody, as his dad Alex, decide to part company, with Alex being the one to leave the family home.

Alex is in his thirties, and is now living in his friend Dan’s spare room. To top it all off, he has just been made redundant. He has a strained relationship with his son, as he doesn’t understand him, nor know how to communicate with him. He even finds it too much to take his son to the park.

When Sam is given a games console by his mum, Alex isn’t very happy with his wife, but over time he learns that through the power of Minecraft, he can start to understand, and learn to communicate with his son.

Being the mother of a thirteen year old autistic child, though not quite as severe as Sam, I could understand what life was like for his mum and dad, alongside having an understanding of how Sam worked too.

Dad Alex doesn’t feel equipped to be able to raise a child with autism. He doesn’t quite understand that children with autism see the world differently, most often in High Definition with the sound turned up. You get the feeling that he is quite scared of his son, especially being on his own with him. I’ve seen this scenario over and over with a few parents. They get frustrated, often not with the child, but with themselves as they feel that they don’t know how to cope.

Mum Jody worships her son, and does everything she can to be there for him, help him, and truly understand him. She finally gets to the end of her tether with her husband. Not only are they growing apart, but his attitude towards Sam is pushing her away. She clearly loves Alex very much, but something had to give and that meant asking Alex to leave.

One thing that I find a vast majority of autistic children love, certainly the ones that I know, is electronic games, whether that be an iPad, games console or computer. They seem to be able to connect with the virtual world a lot better than they do with the real world, so when Alex found an in-road to his son through Minecraft, I wasn’t surprised.

I found that the book had a natural and easy flow to it, and you find yourself getting lost in the life of a father and son. I actually didn’t realise at first that it wasn’t a memoir, but a fictional story. This is how realistic Keith Stuart’s writing is.The story will have you working out, emotion-wise. One minute you will be laughing and feeling happy, the next you may as well let the tears flow as sadness creeps in.

This is a beautiful, heart-warming story about a father and son, and how Minecraft became the joining bridge between them. 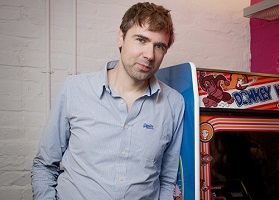 In 2012 my son Zac was diagnosed on the autism spectrum. It was something my wife and I expected – we knew he was different, that he had trouble communicating and was very anxious and reliant on routines – but still, the ramifications felt huge. As a parent, you have all these ambitions and hopes for your children, but when it really comes down to it, you want them to be happy, to be able to share things with them. Sometimes we weren’t sure how we would do that.

But then Zac and his brother and I started playing video games together – especially Minecraft. I have always played games, and since 1995 I have been writing about them, first for specialist magazines like Edge and PC Gamer then, for the last ten years, as games editor for the Guardian. What I didn’t fully understand until Zac came along was how powerful games are as a place to share and be creative together as a family. A Boy Made of Blocks is a story about a dad who wants to communicate with his autistic son; a dad who has forgotten how to play. It’s about how he learns how to do both of those things.

All my career, writing about video games, art, film and music, I’ve been a passionate believer in the transformative power of these experiences. My wife and I met through the grunge music and arty films, and I connected with my sons, but especially with Zac, through games – and especially Minecraft. As a parent, you often find yourself managing what your kids do, but I wanted to write something that said it’s also important to pick up a controller (or a ball, or an action figure) and play. This is a story about letting go, about being a kid – that is how we learned how to talk to Zac. That is how I’ve learned everything important in my life.