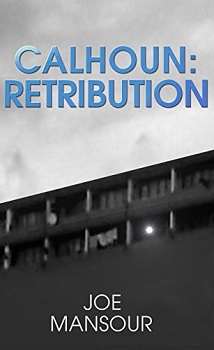 What he did will haunt him forever. For Calhoun life is just about enduring, his only respite the times spent with his daughter. But when you’re the Dark God’s chosen representative life is never going to be so simple.

For the past four years Sarah has been tormented by what happened to her. Why was she taken? Who was the Robot Man? Her latest therapist might be the key to learning those answers. Could Jimmy’s days as a free man be coming to an end?

‘Calhoun: Retribution’ is the latest novel by American author, Joe Mansour.  Four years have passed since we first met our anti-hero of the title.  James Calhoun, an Iraq veteran double amputee, divorced and living in a bedsit, is now considered fit for work and takes a job as a delivery driver. Before long, his colleague meets a sticky end and Jimmy is again on the police’s radar.  Unable to steer clear of trouble, Calhoun cannot stop himself from wanting to find out what happened and why his new friend was murdered. Once more he plunges headlong into the underworld, meeting all manner of unsavoury characters along the way.

As I mentioned when reviewing this author’s previous work, it’s a huge undertaking to set a story in a foreign country, particularly if the characters are native to that place. I commend the author for his attention to English spellings such as ‘haemorrhage’ and ‘colour’ and I was delighted to note that Mr Calhoun’s car had a boot and not trunk, he used a mobile and not a cell phone and wore trousers and not pants.  There were inevitably a few anomalies and the odd sentence that I needed to read twice, with ‘closed a breaker’ being a particular challenge.  I found two factual inaccuracies but if you don’t spot them, I haven’t ruined your enjoyment of the story.

I would take issue with a few bits of dialogue. Whilst some of the characters are living on the margins of society and no doubt extremely politically incorrect, there were a few ethnic descriptions used in conversation which I did not recognise as part of contemporary multicultural Britain.

The tale flowed well but I found the relationship between Sarah and her counsellor rather unlikely.  I wonder how Kate as a trained and accredited counsellor, would allow herself to be drawn into disclosing so much personal information to a twelve year old client?  However as the story progressed, I saw it was necessary to the plot.

There was a fair amount of violence but tempered with pathos, irony and humour, along with some well written descriptive scenes.  Calhoun is a very strong three dimensional character who had several foils to support him and he carried the story well.  This book was very easy to read and I finished it within a few days.

For readers of the previous Calhoun story, there should be no problems linking the two threads at the beginning. Maybe new readers would have benefited from a bit more backstory to understand how Sarah and James are linked and the references to Darak will mean little, unless you’ve read the first book.  I think fans of Joe Mansour will enjoy reconnecting with Calhoun and award ‘Retribution’ a well-deserved four stars.