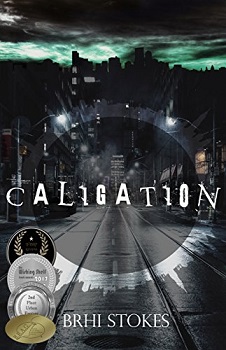 A city of the bizarre and the unfamiliar, inhabited by monstrous beasts and people with unnatural gifts. A city of tall glass spires mingling with old gothic architecture, where wild animals roam alongside the populace.

This is where Ripley Mason finds himself.

University dropout, casual drinker, and newly fledged hitchhiker, Ripley is tired of the daily grind of study, drink, repeat. Only halfway done with a degree he never chose, Ripley heads north to see if life won’t throw him something less monotonous.

Early into his journey, Ripley suffers a brutal car accident and awakens in a rundown hospital. Nervous, he ventures into dark, unfamiliar streets and comes face to face with horrific beasts. Thrown into a world of supernatural fantasy, Ripley fights to discover where he is, how he came to be here and, most importantly, if he can even get home.

‘Caligation’ is a dystopian urban fantasy by Australian-based author, Brhi Stokes. We join the tale as university drop-out, Ripley Mason, hitches a ride with Laura.  After a road traffic accident, he wakes to find himself in a run-down hospital with no sign of his travelling companion. After discharging himself, he discovers he is in a place he doesn’t recognise.

The author has taken the tried and trusted theme of dropping her main character into an alternative world after a trauma and then allowing her vivid imagination to create a multitude of supernatural dangers for him to contend with.

Against this backdrop, Ripley meets all manner of strange people with bizarre abilities, mutations, dialects, dress and customs. It seems everyone is inseparable from their effigia, which takes the form a telepathic creature with whom they have a special bond.  In Ripley’s case, his effigia is an owl named Athena. His lonely existence is enhanced as she becomes the foil he needs as he discovers a little more about the various species that inhabit the city of Caligation.

This is not the usual run-of-the-mill good versus evil scenario, as Ripley isn’t particularly likeable and isn’t on any sort of crusade for the greater good, he just wants to steer clear of trouble long enough to find his way home.

We see the action mainly from Ripley’s perspective but intermittently spend time with some of the other characters.  There is a reasonable balance between dialogue and description, although at times it isn’t always clear who is speaking. Nonetheless, the story moves along at pace and concludes with all loose ends neatly tied together.

In common with a lot of fantasy novels, there were shape-shifters and sorcery but beneath this, there is a fairly interesting story encompassing corruption and intimidation within the basic framework of survival of the fittest.

I struggled with this book in the early stages because I found it hard to engage with a tale that had no foundation in reality. Had I not been asked for a review, it is doubtful I would have read beyond the second chapter. My perseverance was rewarded by some nice touches of humour and banter between Ripley and his owl which gave a bit of counterbalance to what was otherwise a dark and depressing tale.

There was an inspired twist at the end and I have no doubt within its target audience, ‘Caligation’ will be a hit. Although it wasn’t my kind of book, it was quite a clever idea and objectively, I award four stars.

Brhi has been writing ever since she could put pen to paper and daydreaming in every spare second. She adores fantasy of all kinds but has a special love for urban fantasy with a dark edge.

Her fascination with different places and cultures has seen her living overseas for several years, though she currently resides in Australia. This time abroad has strongly influenced her writing, much of which focuses on strange new places.