Today we welcome author Isabella Louise Anderson with the cover reveal for her upcoming new book ‘Cards from Khloe’s Flower Shop‘, which will be released on 22nd January 2017. This post contains affiliate links. 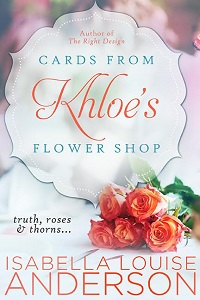 As the owner of a successful florist shop, Khloe Harper trusts her instincts. She has a strong bond with her family and friends, but after being betrayed by her last love, she’s kept herself at arms’ length from romance.

When dashing entertainment attorney Derek Thomas walks into her store, Khloe’s interested is piqued. What at first seems like a business relationship quickly turns into romance, and Derek slowly plucks away the petals she’s been hiding behind. Just as Khloe lets down her guard, she discovers that Derek may not be worthy of her love after all…

Frumpy Connie Albright has a faux fascination with an imaginary man named Walt, sending herself flowers from him to feel less out-of-place with the “mean girls” she works with. Gabby Lewis, a recently widowed senior, isn’t ready to give up on love—which means releasing herself from survivor’s guilt and taking a chance on finding happiness and companionship again.

As these stories intertwine through flowers and cards sent from Khloe’s shop, the three women begin to learn that love can only truly blossom when you trust your heart.

Isabella Louise Anderson grew up with a book in her hand, and to this day nothing has changed.

She is a member of the Romance Writers of America and has been featured on several blogs. While Isabella doesn’t blog a lot, she focuses her time on featuring other writers, along with working on her next book.

She created Chick Lit Goddess to share the love of the following genres: Chick Lit, Contemporary Romance, Romance, and Romantic Comedies! She loves featuring authors and their books, and has has created tour company, Goddess Book Tours.

She lives in Dallas with her husband and cat. She enjoys spicy Mexican food and drinking margaritas, and can be found spending time with family and friends, cheering on the Texas Rangers, and reading.

Isabella’s short story, ‘Meet Me Under the Mistletoe’, was featured in Simon & Fig’s Christmas anthology, ‘Merry & Bright’, in November 2013.

The Right Design is her first novel, and she’s hard at work on her third book.