Today on the blog we welcome Tommy Sponge of The Bespokist Society, with his guest post ‘A Note of Caution to those Attempting to Climb Dollis Hill this Summer‘, as part of the blog tour for the societies new book, ‘The Bespokist Society Guide to London’, which was released on 1st April 2018.

The Bespokist Society Guide to London is a work of fiction written by born and bred Londoner, Jeremy Liebster. Somewhat surprisingly, Jeremy is also a city lawyer – formerly at DLA Piper and now a General Counsel within a large private equity group.

Jeremy is utterly obsessed with travel books and although he might poke fun at urban fads, hipster fried chicken is his guilty pleasure. He also has an unusual interest in clothes hangers.

Those of you familiar with The Bespokist Society will know that we love nothing more than celebrating those magnificent Londoners achieving their physical goals – it’s not for nothing that we’re the proud sponsor of September’s Walk for Feet (the incredibly popular, 500 metre sponsored walk from Waterloo to Waterloo East in aid of verruca charities).

But with all due respect to the Walk for Feet, climbing the unforgiving Dollis Hill in the Summer is quite a different prospect.  We’re admittedly delighted that there are far more resources available to Dollis Climbers in 2018 than there were even five years ago : The aptly-named Bespoke Ascents provides strategic and tailored ascending tips from their handy Base Camp location overlooking Brent Cross while Solly Brookes has launched The Dollis Bottle Shop next door – offering hydrogenated water in handy flasks made from natural Irish plastics. The litre bottles handily come in a variety of weights (from Light Lizzy to Heavy Harry) and are sold with a complimentary, multi-purpose lid.

But this Summer has taken a hardy toll and opened our eyes to the grim realities of this extraordinary peak. Two weeks ago a party of keen young Beaver Scouts had to be rescued when they encountered a swarm of flies at the 25 metre line. And then there was veteran climber Aiden Fenchurch – who foolishly attempted the Wembley Ascent without a rope buddy and was later found wandering around Dudden Ridge with a lazy eye.

While we don’t want to put anyone off, any climber setting out this Summer should be mindful of the local folklore.  So the saying goes,

“When temperatures soar to 28 degrees in Hampstead, t’will hit 29 on Dollis Hill.”

If in doubt we strongly advise going with the Cricklewood Ascent. It may not be as glamorous as the other paths but you’re more likely to survive and you can still boast to your mates about having conquered Europe’s Second Highest Peak. God’s speed climbers! 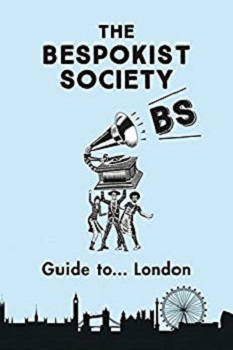 As the first travel book produced by the hugely influential Bespokist Society, this handy guide takes you to a London you’ve never seen: a London of challenging Etruscan restaurants, edgy branding parlours, emoji hotels and hidden Icelandic communities; a London where 8-ply toilet paper is a thing.

On the way, meet an eclectic band of inspiring Londoners – from scriveners to socialites via urban wordsmiths and coffee preachers – and see why London is now the global epicentre of Bespokist consciousness, community and culture.

You can find out more about The Bespokist Society by visiting the website/social media sites below.