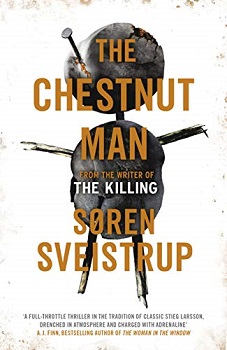 One blustery October morning in a quiet suburb of Copenhagen, the police make a terrible discovery. A young woman is found brutally murdered in a playground and one of her hands is missing. Above her hangs a small doll made of chestnuts.

Ambitious young detective Naia Thulin is assigned the case. Her partner, Mark Hess, is a burned-out investigator who’s just been kicked out of Europol. They soon discover a mysterious piece of evidence on the chestnut man – evidence connecting it to a girl who went missing a year earlier and is presumed dead – the daughter of politician Rosa Hartung.

The man who confessed to her murder is behind bars and the case is long since closed.

Soon afterwards, another woman is found murdered, along with another chestnut man. Thulin and Hess suspect that there’s a connection between the Hartung case, the murdered women and a killer who is spreading fear throughout the country. But what is it?

Thulin and Hess are racing against the clock, because it’s clear that the murderer is on a mission that is far from over . . .

Detective Naia Thulin works in the Homicide department in Copenhagen, Denmark which is run by Detective Nylander. She is a single mother to daughter Le and is finding the department a little boring and so requests a transfer to NC3, National Cyber Crime department.

Mark Hess once worked at The Hague for Europol. After some issues, he is transferred to the homicide department in Copenhagen. He doesn’t want to be there and is merely counting the days until he can be reinstated at Europol.

The two detectives are paired up and their first task is to attend the crime scene of a woman found beaten and killed in a park. She has one hand missing and above her dangling is a man made from Chestnuts. Upon analysis of the chestnut man, the detectives discover a fingerprint belonging to a little girl who was killed nearly a year ago and someone was convicted for her murder – Although her body was never recovered.

The mother of the little girl that went missing is politician Rosa Hartung, Minister for Social Affairs who has just returned to work after being given time off to grieve. Upon her return, she suddenly begins being threatened by an anonymous person.

Thulin and Hess have a love, hate, relationship. When a second body of a woman is discovered brutally beaten, with both hands cut off and another Chestnut man with the fingerprint of the little girl on, the pair have to work together to find out a reason behind their murders, who the culprit could be and how is the fingerprint of a missing girl who is presumed dead being found at the scenes.

Can the detectives find the answers before more deaths occur?

The Chestnut Man is written by Søren Sveistrup who wrote the TV show, The Killing. I haven’t seen the programme but after reading this book I am going to see if I can get it on catch up. The book is enthralling and at times had me on the edge of my seat. It is part thriller, part detective/police procedural, and part political, all three I love to read about and find them entertaining.

The main characters, Thulin and Hess and true to life, they have plenty of flaws and you get to know them alongside the case that they are working on. The plot had plenty of twists, turns, and red herrings to throw you off the scent. I must admit when the killer was revealed I was a little shocked but looking back I could see how they manipulated what was happening.

This is a brilliant debut book. It kept me in suspense from the opening scene, which really is something. The plot is dark, gritty and captivating and I didn’t want to discover who the killer was as I knew that it meant the book was coming to a close. This is one amazing book that if you love thrillers you should really read it. Nordic Noir at its best.

Søren Sveistrup is an internationally acclaimed scriptwriter of the Danish television phenomenon The Killing which won various international awards and sold in more than a hundred countries. More recently, Sveistrup wrote the screenplay for Jo Nesbø’s The Snowman.

Sveistrup obtained a Master in Literature and in History from the University of Copenhagen and studied at the Danish Film School. He has won countless prizes, including an Emmy for Nikolaj and Julie and a BAFTA for The Killing.