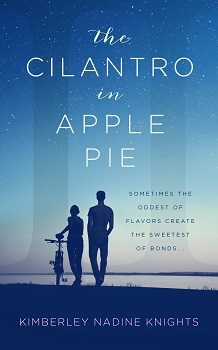 Fragnut. Confused? Well so is everyone else at Lumiere Hall Prep when sixteen-year-old Rubie Keane rolls in from Trinidad and Tobago talking her weird lingo. Not that she minds the culture confusion; she’s determined to leave the past behind her and be overlooked—but a certain stoic blue blood is equally as determined to foil her plans.

Gil Stromeyer’s offbeat personality initially makes Rubie second-guess his sanity, but she suspects his erratic outbursts of violence mask a deeper issue in his troubled, charmed life. Despite his disturbing behavior, a gradual bond forms between the two.

However, on the night of the annual Stromeyer gala, events unfold that leave Rubie stripped of her dignity and kick Gil’s already fragile world off its axis. Both their well-kept secrets are uncovered, but Gil’s revelation proves that sometimes the best remedy for a bad case of lost identity, is a dash of comradery from an ally packed with flavor.

All I could think of as I felt the wheels of that Boeing 767 lift off the tarmac was that if I died, the pamphlet at my funeral service would be so lame. Celebrating the life of Rubie Keane: Mother of…no one. Grandmother of…(crickets). Wife of…Mr. Nobody. Friend of…
I had to stay alive, if only to make sure that the few people who would attend my service after my hypothetical death wouldn’t be subjected to the sheer boredom that was my past life—if that made any sense at all. But there was one huge problem. I unofficially held the title of an FFF, and since I was a frequently freaked-out flyer, the possibility of me going temporarily insane, running to the nearest exit, and yanking that door open for all three hundred plus passengers (including myself) to get sucked out like a vacuum was very, very high.

I could almost feel my older sister and her new husband grinning at my overly tense state from the seats behind me. “I’ll sell you my last Ambien for five bucks,” my brother-in-law Dennis whispered, leaning in close to my right ear.
“Dennis…” Violet warned, but she quickly smiled when he winked at her playfully. “Try to relax, Rubie. It’s only a four-hour flight.” “Thanks for reminding me,” I grumbled as I took a deep breath that filled my lungs to the max.

I heard Dennis try to suppress a chuckle, and not too long after that, the resounding smack of Violet’s hand across his arm. Then there was the undeniable sound of a kiss. To say that those two were sickeningly adorable would be true but not quite accurate enough. However, as much as I wanted to throw up every time they were lovey-dovey toward each other, I smiled inwardly, knowing that my sis was able to bag a real nice ginger fella from Massachusetts.

I hated backstory, even in books, so when I explained to people how the decision was made for me to migrate to the States with my sister, I said the following:
1. My sister married a foreigner
2. My parents and I decided it was a good opportunity to easily transition into a US college and
3. My grades were good enough to earn a scholarship to a fancy private school
That was basically it, in a nutshell.

Of course, deciding to move from my sunny Caribbean homeland of Trinidad and Tobago to a small town named Mellowbrook right on the outskirts of Boston wasn’t as easy to make as I made it sound. There were arguments, objections, inevitable fears, and the stupid thoughts of abandonment that kept plaguing my family… but in the end, I believe we all came to the same conclusion. Dennis Peterson was my sister’s red-headed soul mate, but he was also my chance to inexpensively further my education. Yes, that sounds horrible, but my parents and I were always up front about our reasoning.

Daddy, when he was coherent, would tell him: “You can only have my first born for a lifetime if you take my second born for two years.”
It was said in jest, but with clear, underlying truths attached to it. Dennis fortunately had no problem with this trade-off. We used to have these one-on-one chats, Dennis and I, where I asked him if he thought I would cramp their newlywed life. He always said no. He actually thought that my being there would make the transition easier for his new bride; so that was one less thing he needed to worry about. Plus, the house they were moving into had a second bedroom that just so happened to be slightly separate from the majority of the house—on the ground floor, behind the kitchen.

I couldn’t understand the layout at the time, but he told me to trust him. Which I did. However, I wasn’t particularly pleased when he halfheartedly joked that I could be their very own live-in babysitter if he and Violet had children a little earlier than initially planned. I prayed to be in university long before I heard the pitter-patter of Peterson feet. So my parents did whatever they needed to do to get everything
organized—visas, important documents, transcripts—and then a year later, on a cloudy day much like any other cloudy day, my ticket was placed on the dining room table and my suitcases were stacked alongside my sister’s in the car trunk. We said goodbye to Daddy at home, but at the airport gates,
Mummy cried more than I’d expected her to. Then again, her tears were completely warranted. She was losing not one but two children in one swoop.
I was kind of surprised I didn’t cry with them. I should have, because there was no place on earth like Trinidad, and I was leaving for what could be a very long time.

There’d be no more doubles for breakfast at Long Circular Mall with Daddy. No more fourteen holidays in one year. No more ole talk in public areas. Funny that I was only thinking about all the silly, little things I was going to miss about Trini life, but in the back of my mind, I
was somewhat happy to be escaping the past experiences that made me feel unworthy to be considered a—Boop!

The hollow sound of the bell disrupted my train of thought and echoed through the pressurized cabin of the plane. “This is your captain speaking. We’re now flying at approximately thirty-five thousand feet, and there seem to be clear skies ahead. We’ll be arriving at General Edward Lawrence Logan International Airport in just under three and a half hours, so sit back, relax, and enjoy the rest of your flight. Thank you for flying American Airlines.”

Kimberley Nadine Knights knew when she kept willingly opting out of parties so she could stay home and write instead, that she was destined to be an author.

Born and raised in the tropical twin islands of Trinidad & Tobago, when this Caribbean girl isn’t creating new plotlines for her ever growing lineup of fictional characters, she spends her time strumming her guitar to indie rock songs and snapping once in a lifetime photos halfway across the globe in countries such as Estonia, Finland, Sweden, Denmark and France.