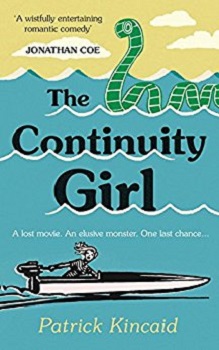 1969. Hollywood descends on a tiny Scottish village for the making of Billy Wilder’s most ambitious picture yet: a sprawling epic detailing The Private Life of Sherlock Holmes. But the formidable director and his crew soon come into conflict with Jim Outhwaite, a young scientist seeking evidence for monsters.

2014. Stuck just a short walk from the East London street where she grew up, ambitious Film Studies lecturer Gemma MacDonald is restless and hungry for change. A job offer in the Highlands seems to offer escape – but only at a cost to her relationships with family and an equally ambitious American boyfriend.

Then a lost print of Gemma’s favourite film turns up, and with it, an idea…

Two stories, separated by 45 years, are set on collision course – on the surface of Loch Ness, under the shadow of a castle – by the reappearance of the continuity girl herself: April Bloom.

The Continuity Girl is set in two era’s some 45 years apart and between London and Inverness, Scotland – The home of Loch Ness and Urquhart Castle.

In 1969 film director Billy Wilder and his crew have descended into Inverness, particularly the loch and castle for the filming of ‘The Private Life of Sherlock Holmes’. Local scientist and Marine Biologist Jim Outhwaite is not happy. The filming is disrupting his research into the Loch Ness and the Monster that may inhabit her.

2013, Dr. Gemma MacDonald who is a film studies lecturer has been offered the job of a lifetime in Scotland. A rare reel of the Sherlock Holmes film has been found in an attic. Given that Gemma is most knowledgeable on the film, she has been asked to oversee the release of the missing section and also see if she can find someone to interview who was present at the making of the movie.

I’ll start by saying that I found this book a little hit and miss and hard to follow at times. Parts I was really intrigued about and glued to the pages, others I found myself skipping past. This is in no way a reflection of the brilliant writing and plot though, more my interest.

You see I’ve never heard of Billy Wilder – Surprising seen as he directed some of the last centuries biggest movies, I also had never heard of the film from the book either. Plus I’ve never been to Inverness, nor have an interest in the Loch Ness Monster. Not a great combination when the book is mainly a fictional account of the event surrounding the making of the movie. I ended up Googling about the movie and the strange goings-on that occurred and the reception it received.

The plot has been well thought-out and the shift between the two time periods was done smoothly and so that you knew exactly which era you were in. I love that the two periods were essentially weaving between one another. The characters were a delight to read about and I enjoyed getting to know them, even if I did find Gemma’s parents a little condescending and annoying at times.

There are quite a few memorable moments in the storyline and a good few funny sections too. There are also lots of cultural references about the 1960’s that if you were around in that decade you will enjoy being taken back in time.

The book is certainly different and definitely worth a read.

Like April in the novel, Patrick is an Anglo-American. He was born to an English mother in Amarillo, Texas, but moved to the UK when his American father was stationed in Oxfordshire with the USAF in the mid-1970s. Unlike his older brother, Patrick was sent to a local rather than a base school, and very quickly went native. He eventually gained a PhD in English Literature at the Shakespeare Institute in Stratford-upon-Avon. For the past 14 years, he has taught English to secondary school children in an inner-city comprehensive in Coventry.

Long a fan of Sir Arthur Conan Doyle’s Sherlock Holmes stories, Patrick contributed one of his own, ‘The Doll and His Maker’, to MX Publishing’s SHERLOCK’S HOME: THE EMPTY HOUSE, an anthology of pastiches put together to raise funds for the preservation of one of the author’s former homes. As well as writing fiction, Patrick is a keen poet. He was short-listed for the Bridport Poetry Prize in 2012 and long-listed for the Fish Poetry Prize in 2013.