Today we welcome author Lori Goldson with the cover reveal for her upcoming new book ‘The Adulthood‘, which will be released on 22nd November 2016. This post contains affiliate links. 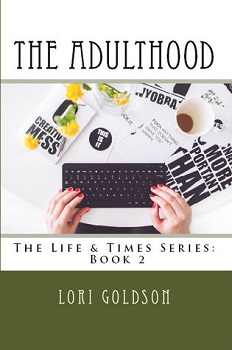 With her degree in hand and college campus in her rear view mirror, 22-year-old Irene Jimenez is ready to grapple with her newest adversary, adulthood. With the help of a family friend, Irene quickly lands a job where she meets her new boss, the brilliant, charismatic, and virile Justin.

Fear-stricken and paralyzed at the idea of being on her own for the first time in life, Justin’s guidance in the workplace leaves Irene intrigued to get better acquainted with her new boss, despite her current relationship situation with her live-in boyfriend, Artie. Justin notices Irene’s inquisition, and admits his curiosity about her as well, despite his own set of personal and professional obligations.

Enjoying her work and curious about her boss, Irene finds herself losing sight of the objective, and turns to her longtime friend, Michaela, who is entrenched in her own adulthood obstacles with her girlfriend, Ryan, including a domestic dispute that pushes Irene even closer to her boss in ways that leave her boyfriend, Artie, jealous.

Irene and Michaela are equally trapped in wading the waters of adulthood as they try to balance their actual jobs with their romantic desires and fears contained. Irene finds herself struggling, however, with balancing work and pleasure with Justin as her boss, and is soon placed in a new work environment where an old adversary becomes a new supervisor, and is forced to confront old emotions that she thought were buried in the past.

My first novel came along during the wee hours of the night in 2011. I was laid off and laid up after a car accident, and figured it was time to bring my goal to light. Four years later, it is finally available to the masses. I took every frustration and disappointment that life had handed me thus far and created some truly relatable characters. Who wouldn’t be able to connect to a lost college student? Aren’t we all lost to some extent at that time?

I’m a Jersey girl through and through who lives in Pennsylvania. I’m a Westonian, a Blue Hen, and a Hawk with a flair for the Spanish language. I’ve been bit by the traveling bug on numerous occasions, and I won’t be surprised if my first child is born in the middle of a yoga studio. Oh yeah, I have a husband now.