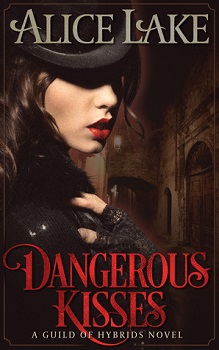 Miss Lavinia Halls is a member of the Guild of Hybrids, a secret society dedicated to helping women in need. When faced with a terrified new client, Lavinia declares that her client’s fiancé must pay for his sins. The fact that she can’t take her eyes off the man’s kissable lips only spurs her resolve to bring her assignment to a quick conclusion.

Eric Yorke, Viscount Mathieson, wishes nothing more than to distance himself from his treacherous fiancée, but in his quest to do so, he finds himself trapped in the clutches of the unconventional Miss Halls. The delectable yet annoyingly persistent woman seems intent on ruining his life no matter how much he tries to thwart her attempts.

Her efforts to seek and destroy meet their match in his determination to foil her plans, until their struggles collide in a scandal of enormous proportions. Fated together, they must overcome ruin, danger and heartbreak. Will they be able to survive their past or is their future together doomed?

I was very pleased to try out an historical romantic fiction novel. This was a new-to-me genre – I love historical dramas on TV and was looking forward to getting stuck into Dangerous Kisses.

On the surface this book had all the ingredients of an addictive read – Victorian England, intrigue, secret societies and scandal. Sadly, I was not immediately hooked as I had hoped.

I think the problem was that I did not engage with the leading female character – Lavinia. I did not find her impressive or inspiring, I found her irritating. I skipped through some of her endless self-analysis because it did not interest me and seemed repetitive. I even found her quite arrogant at times. I found it hard to believe that a leading member of such an established guild would not do her homework properly before embarking on a mission. This seemed to be at odds with Lavinia’s capable character and yet it is what the whole story hangs off.

In contrast, I thought that the male lead character, Eric, was superb and I loved the exchanges between him and his father in particular. I also liked Aunt Cynthia and felt that I was getting a fascinating glimpse into Victorian society which I thoroughly enjoyed. There are a few ‘bedroom’ scenes which I felt were handled well and fitted in perfectly with the plot.

I did sigh a lot about Lavinia’s ‘she’s in love but doesn’t realise it’ issues. This added an astonishing lack of self-awareness to her arrogance but perhaps I’m just not a romantic fiction fan!

On the plus side, the novel is perfectly paced and well written. I would love to read more books by Alice Lake because she weaves a great tale. I need to discover if I genuinely don’t have a taste for romantic fiction, or if it was just this character that annoyed me so much.

Alice Lake’s interest in the unusual is reflected in the stories she puts down on paper. Along with her passion for romance and 19th century history, she is a champion for women’s rights. Who said women had no voice, no say and no choice during Victorian times? According to Alice, they had all that and more. They could teach and build, fight and heal, and do so many other things not traditionally deemed proper.

Alice is an unusual case herself. She grew up in three countries and on two continents. Suffering from a lack of cultural identity, she borrows whatever traditions suit her. Nothing is rigid, and fluidity encompasses her world. This philosophy of open-mindedness spills into her writing, making for unexpected romance stories.