This week on ‘The Writing Life of:‘ I am thrilled to be interviewing author Daniel W Koch. Daniel will be sharing with us detail of his writing life, telling us all about his latest book ‘The Prince and the Thief‘, which was released on 30th May 2015 and answering a few fun questions too. This post contains affiliate links.

My writing interests are a result of being raised on Harry Potter, Lord of the Rings as well as Stephen King and of course Bram Strokers Dracula.

Like these books, I can see my book from its prologue through the movie credits. The Protector is part of a four book series and I look forward to continuing the saga of Jason, developing his relationship with Aderes and further exposing the biblical implications that will certainly raise a few eyebrows.

I always loved telling stories. As a kid, I used to draw comics. When I grew older, I wrote movies for my friends and me to star in. Around that time I think I really figured out that was what I wanted to do.

On one particular day, I recall skipping my middle school lacrosse practice because I was so into writing my newest movie script. I had a habit of quitting sports (they never quite interested me like they did my friends) but that was the first time I had a good reason.

I started writing novels in high school and eventually published my first at 16 years old, "Descendant: The Protector."

Night-time (there’s a pun in there somewhere about following my dreams at night…). Since I started writing while still in school, the most free time I had was at night. I’d stay up until 2 o’clock in the morning on school nights.

Luckily, I was able to get a free period in my senior year first thing in the morning so I could sleep in a bit more. Holiday breaks helped a lot too. Most importantly, my parents have been incredibly supportive. They tolerate my odd habits more than I think most parents would.

I’d never be where I am without J.K. Rowling.

As a kid, my parents had trouble getting me to read much until they discovered Harry Potter. After the first few books came out, I was addicted to reading anything I could get my hands on. Writing my own stories followed shortly afterward.

I no longer have an average writing day. As I mentioned earlier, nights became my most successful time to write, and while they still are, my schedule rotates depending on when I actually fall asleep.

Computer. It’s simpler, has spell check, and I have to upload to ebooks at some point anyway!

Falko Van De Hemel. He’s one of the key antagonists from ‘The Descendant Series’ whose story parallels the main character’s, but from hundreds of years earlier.

I try not to plot every little detail (it takes the fun out of writing), but as I’ve written more stories, I’ve found the importance of a good outline. Key details need to be decided ahead of time for the story to flow toward a developed ending. I need to know how a character will start and where he or she will end up to properly show how he/she changes throughout the story.

I need to have a solid world set for the characters to live in before I start writing. I’ll leave certain scenes to be decided while I’m writing, the small details, but large plot points are always locked in ahead of time. Rarely do I change something once I have it outlined. 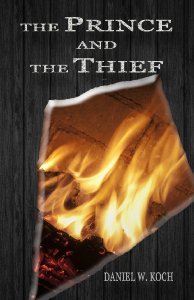 Gage Blackwood is the prince of a broken kingdom. After waging two wars against powerful sorcerers, his people have hidden behind a wall in the last city in Aboridge. Though the sorcerers were banished to the wastelands and have all but died off, tensions still run high.

They seek revenge, and while they’re far outnumbered, their power is unmatched. With his father soon stepping down as king and his menacing sister next in line to the throne, Gage must do everything in his power to keep a third war from breaking out.

Will his efforts be enough to finally bring unity and peace to the war-torn land?

I came up with the concept and world of "The Prince and the Thief" while writing The Descendant Series. So from that original idea to when it was published in June of 2015 was roughly two to three years.

While it wasn’t exactly writer’s block, I had a period of time where I had to stop writing. I couldn’t totally concentrate on the novel while in my last semester of college.

I majored in Screen writing, so I had to write a screenplay for my final project, and along with writing/filming a series of videos with friends, it was hard to find time to focus on "The Prince and the Thief". I got back into over the following summer and finished that winter.

These particular names were chosen in a different manner than my usual (which entails searching for names with meaning based on what the character is doing in the story). The majority of the names in "The Prince and the Thief" (and its soon-to-be prequel, "The Sorceress and the Moving Mirror ") were borrowed from my favorite You Tubers.

The characters don’t share any similar attributes to their real-life counterparts—no looks, personalities, or even familial relations were used in the story. I also used only first names. So while these characters are not a representation of any real person, I’m a big fan of some particular YouTube channels (Shaytards, CTFxC, KassemG, etc.) and thought it would be fun to include their names in the book.

This is always a tough question! I’ll do the 4 main characters:

Gage – Josh Feldman (I’ve never seen him in anything, but I was having trouble thinking of someone for Gage and Feldman fits the look/age pretty well).
Logan – Chris Pratt
Colette – Chloë Grace Moretz
Avia – Natalie Dormer

My parents read every book I write chapter by chapter, as I write them. Depending on how long it takes me to write a particular chapter, this can be very frustrating, but they get through it and usually reread the whole thing once it’s done.

The only other person who received a copy pre-publisher was my friend, Hannah, who’s been involved with my books since day one.