The Dark Side of Me by Belinda J McCartney – Book Review

The Dark Side of Me Belinda J McCartney – Book Review 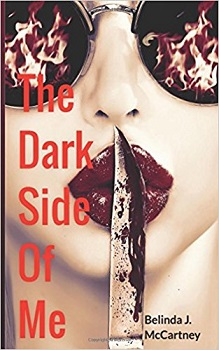 Fiction New Adult G. is a witty young woman who lives most of her life under the shadow of her insecurity. She knows she is much more than her reflection in the mirror. An unexpected event brings her dark side to life, and a whole new life unfolds before her eyes.

Welcome to the world of Gertrude Whitefield, a size 18 Londoner seeking a swanky job in marketing. More commonly known to her friends Stella and Taffy, and boyfriend Angus, as G.

As the novel opens, G is observing her reflection in the mirror, reciting “Mirror mirror on the wall, who is the prettiest of them all?” Alarm bells are ringing, The Dark Side Of Me is going to be about identity and self-worth.

In the first chapter, we learn three important things: G is very concerned with her appearance, particularly her weight – “the darker the shade the slimmer you look” – she has a boyfriend, and she doesn’t get the job she craves because she’s lost out to old nemesis and blonde beauty, Ella. In her disappointment, she goes home and comfort eats cake instead. After all, “Food does not judge me”.

G’s also mistaken for being pregnant in this chapter. This alone is embarrassing enough, but it’s interesting how when she’s asked by a stranger what she’d name the baby, she replies, “Vanity”. It may not be a baby inside her, but a projection of her own feelings emerging as she replies.

Instead of getting the job she wants, she’s offered the receptionist role, which she accepts. It’s quite clear from early on that G hates herself. She hates how she looks, what she’s called, and her inability to get what she wants. She hates sexual contact with her boyfriend, even resulting in buying outrageous sex toys to scare him off, yet she craves nothing more to be “sexy and slimmer”. So, what to do? In desperation, she begins taking diet pills, which promise her the figure she wants while still consuming all the food she wants. In other words, she’ll be able to have her cake and eat it. Perfect. In her mind, losing weight equals beauty, equals confidence, equals being just like her friends. She’s fiercely competitive, and very conscious of keeping up appearances, no matter what the cost.

Weeks go by, and while she continues to eat and drink what she wants, her work gets worse and it’s clear she’s getting physically and mentally ill, to the point that she feels “something boiling inside” like a “pressure cooker about to explode”. To feel better, she travels to surprise her boyfriend Angus, who’s based in Birmingham, letting herself in his flat while he’s at work. The only problem is she’s at boiling point, and it won’t take much to tip her over the edge… cue a massive discovery!

This is the turning point in The Dark Side Of Me. The demons inside G explode and seek thoughtless revenge. She’s numbed by her own actions, and completely transformed. Her “heart has turned to stone”.

Returning to London, she completes this transformation to the so-called “dark side” by changing her name, insisting on being called Miss Whitefield at work (oh the irony of being Whitefield when her actions are so dark!) and taking her coffee black. She’s confident and sassy, and she likes “this new me”. Her appearance has changed too; no longer size 18, she’s turning heads with her new bright style and vintage dresses.

On the outside, G has become one of her friends, the person she’s always wanted to be. But the route she’s taken to get there is horrifying.
I found following G in her descent to crime and revenge chilling and engrossing, and I loved all the details McCartney adds in this transformation of her identity. However, I wasn’t sure if I was supposed to like G or sympathise with her actions, even in the beginning. Oh, and the ending will leave you questioning everything!

Overall, The Dark Side Of Me has some brilliant moments in exploring the idea of appearance versus reality to the extreme, but I would have liked to have seen more interaction between G and the other characters to get a better of sense of why she felt the need to compete with them so intensely.