A Darker Shade of Sorcery by William Collins – Book Review

A Darker Shade of Sorcery by William Collins – Book Review 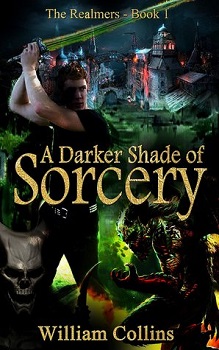 The lonely and grieving Evan Umbra is the newest Venator to enter Veneseron, the school for demon hunters.

A Venator is a wizard, a spy and a demon hunter rolled into one. They’re taught how to wield their sorcery and enchanted weaponry by orcs, elfpires and aliens alike.

Their missions range from battling monsters and saving countless lives in the multiple worlds, to the more peculiar, like wrangling killer unicorns and calming down drunken yetis. In their free time Venators enjoy goblin soap-opera’s and underwater bubble travel, but they also understand that every new mission they’re given could be their last.

Whilst learning how to manipulate the elements, summon creatures to fight for him and shoot Spellzookas, Evan encounters a dangerous rival and meets a girl who makes him feel nauseous; but in a good way. He makes the first friends he’s ever had in the carefree Jed and the reckless Brooke.

Whilst Jed gets on the wrong side of a rival Venator, Brooke finds herself falling for the enigmatic demon hunter who brought her to Veneseron, not knowing he isn’t quite human. But it soon becomes apparent that Evan is more than just a Venator. Everyone wants to kill or capture him, from demons to Dark-Venators and even people he’s supposed to be able to trust.

‘A Darker Shade of Sorcery’ is the first in the Realmers Series by British author William Collins. It is a fast-paced fantasy adventure written in the third person.

I found two cover designs when I was searching for the synopsis, both of which are eye-catching and thought-provoking. I was particularly drawn to the black and white version as its simplicity was sufficient to convey a strong feeling of menace.

Collins uses the tried and trusted technique of painting a picture at the beginning and dropping his players into the scene. Other literary devices are used in abundance with: ‘water bled from a bruised sky’ being good examples of both alliteration and anthropomorphism. If these techniques are employed skilfully, they create strong images for the reader and add additional depth to the tale.

The main protagonist is Evan, a teenage boy, with whom the reader immediately feels sympathy. The story begins with a dual thread as we also meet Brooke, who is taken from earth on the same day as Evan. Both find themselves caught up in a bizarre life-changing situation and the majority of the action is seen through their eyes as their parallel experiences unfold in the world of Veneseron. Their hitherto unknown skills are developed and honed and lead them to flourish in this new land.

We are introduced to some diverse peripheral players who contribute to moving the story forward; in particular Evan’s foil Jed, who is often used as a conduit for humour. This provides a welcome contrast and a little respite from the intensity of the action.

The primary theme is good versus evil, with self-discovery and emotional awakening playing their parts. The plot is exciting and innovative, not least due to danger lurking for Evan from a multitude of directions, including possible skulduggery close to home.

The writing style is free-flowing and the two separate threads finally converge with the structure maintaining a tight integrity. There are a few twists and turns along the way, taking the reader by surprise. The author’s attention to detail is meticulous and I was effortlessly transported to this parallel universe filled with all manner of strange, colourful beings where many innovative methods of sorcery are utilised.

I suspect the target audience is predominantly teenage/young adult but that didn’t prevent me from enjoying it immensely. I commend William Collins for having faith in the strength of his descriptive writing without the shock tactic of gratuitous violence and whilst there was a degree of blood and gore, it worked in the context of the tale.

Collins has presented a well thought-out, creative and entertaining story with many exciting scenes and if you like fantasy drama, you will enjoy this work. I look forward to more from this author and award ‘A Darker Shade of Sorcery’ a richly deserved five stars. 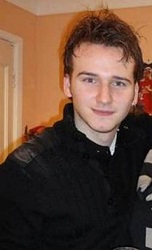 A Darker Shade of Sorcery is the first in The Realmers Series. The sequel, Moonlight War, will be out soon.