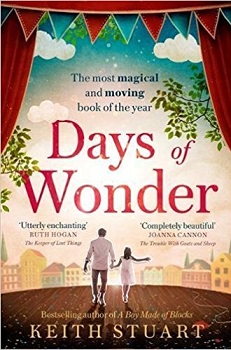 Tom, single father to Hannah, is the manager of a tiny local theatre. On the same day each year, he and its colourful cast of part-time actors have staged a fantastical production just for his little girl, a moment of magic to make her childhood unforgettable.

But there is another reason behind these annual shows: the very first production followed Hannah’s diagnosis with a heart condition that both of them know will end her life early. And now, with Hannah a funny, tough girl of fifteen on the brink of adulthood, that time is coming.

With the theatre under threat of closure, Hannah and Tom have more than one fight on their hands to stop the stories ending. But maybe, just maybe, one final day of magic might just save them both.

This is the story of Hannah, who just before her 5th birthday, was diagnosed with a serious heart condition called Cardiomyopathy. Now just before her 16th birthday she is seeing the effects on her body that the condition can cause. Tiredness, fainting, breathlessness, etc. The doctors don’t know how long her heart will last.

Her single father Tom is the manager of the local theatre and every year for her birthday he has put on a show for his daughter to celebrate. However, the council is after closing the theatre down to make way for housing.

It’s not just a building though, the theatre is part of both of their lives. It how he kept going when all around him was crumbling apart. It how the magic was kept alive inside of Hannah. It’s where the extended family of actor and actresses gather. All who have been here for the pair of them for the last ten years.

This is also the story of a young girl with a rare illness coming to terms with her life and trying to live it to the full.

‘Days of Wonder’ is one of the most beautiful books that I have ever had the pleasure of reading. keith Stuart’s first book, ‘A Boy Made of Blocks’ was amazing and set the bar high. This second book has pushed that bar even higher. It is utterly captivating and if I could award it more than five stars I would.

The story is heartfelt and so poignant. It is funny and touching at the same time. It gets inside of you and becomes part of you. From the opening scene to the very last page, this book will play with your emotions. Now I’m not one to get teary-eyed, but the epilogue got me.

I can’t stress how amazing this book is. Long after I had read that final word, I sat there just thinking about it. It is spectacular, and I truly believe that 2018’s must-read novel has arrived.

In 2012 my son Zac was diagnosed on the autism spectrum. It was something my wife and I expected – we knew he was different, that he had trouble communicating and was very anxious and reliant on routines – but still, the ramifications felt huge. As a parent, you have all these ambitions and hopes for your children, but when it really comes down to it, you want them to be happy, to be able to share things with them. Sometimes we weren’t sure how we would do that.

But then Zac and his brother and I started playing video games together – especially Minecraft. I have always played games, and since 1995 I have been writing about them, first for specialist magazines like Edge and PC Gamer then, for the last ten years, as games editor for the Guardian. What I didn’t fully understand until Zac came along was how powerful games are as a place to share and be creative together as a family. A Boy Made of Blocks is a story about a dad who wants to communicate with his autistic son; a dad who has forgotten how to play. It’s about how he learns how to do both of those things.

All my career, writing about video games, art, film and music, I’ve been a passionate believer in the transformative power of these experiences. My wife and I met through the grunge music and arty films, and I connected with my sons, but especially with Zac, through games – and especially Minecraft. As a parent, you often find yourself managing what your kids do, but I wanted to write something that said it’s also important to pick up a controller (or a ball, or an action figure) and play. This is a story about letting go, about being a kid – that is how we learned how to talk to Zac. That is how I’ve learned everything important in my life.