Today we welcome author J. Frank James with an excerpt from his book ‘Dead Money Run‘, which was released on 12th August 2013. This post contains affiliate links. 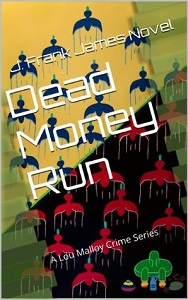 Lou Malloy learns of his sister’s death right before he is released from prison, having served 15 years for the theft of $15 million from an Indian casino.

He wants two things: to keep the $15 million, which no one has been able to find, and to track down and punish whoever killed his sister.

Lou Malloy teams up with Hilary Kelly, a private investigator. In no time, Lou has found the hidden $15 million, recovered guns and ammunition hidden with the money, and murdered two low-level mobsters and fed them to the crocodiles.<

Giveaway prize is one copy of ‘Dead Money Run’ by J. Frank James, either paperback or for Kindle.
Giveaway open to US residents only
Giveaway has now ended

J. Frank James has a passion for writing, and he certainly has the knowledge and experience to write realistic crime thrillers, thanks to his extensive background in law.

Jim attended law school, where he was a member of the law review. He even went on to pass the state bar and started his own law practice that specialized in complex litigation. Jim’s experience in law helps lend credibility to his crime fiction books. He has also traveled extensively and gains inspiration for his crime thrillers from his travels. From observing other cultures and gaining new experiences, Jim is able to infuse new life into his books and develop believable characters that readers can identify with.

J. Frank James writes crime thriller novels that are gripping and suspenseful. In 2013, he began publishing The Lou Malloy Crime Series, which is expected to span 20 books. The series follows Lou Malloy, a hardened criminal who did 15 years in prison for the theft of $15 million, and his partner Hilary Kelly, a private investigator.