Death in a Major by Sarah Fox – Book Review

Death in a Major by Sarah Fox – Book Review

The new season for the Point Grey Philharmonic starts off on a sour note when one of the symphony’s wealthy benefactors drops dead in the second Music Lover’s Mystery from author Sarah Fox.

When Archibald Major, local big wig and nasty tyrant, drops dead at a post-concert reception, violinist Midori Bishop soon suspects foul play. Although Midori has no intention of getting involved in another murder investigation, that all changes when Jordan – her violin student and the victim’s grandson – seeks her help convincing the police that the real killer is his uncle, a low-level criminal.

As Midori digs into the victim’s life, she discovers that he was a man who created discord at every turn, even within his own family, and there is no shortage of potential suspects.

When someone close to Midori unexpectedly confesses to the crime, Midori must race to discover the identity of the true killer before an innocent person goes to jail for a crime they didn’t commit… and before Midori herself becomes a victim in the killer’s deadly encore.

Violinist and member of the Philharmonic Orchestra, Midori Bishop has always been the inquisitive type. When Mr. Major, one of the Philharmonic’s benefactors suddenly dies during the orchestra’s open-night reception event, Midori suspects foul play.

Returning to the scene of the crime the next day, her suspicions are upheld when the police are sniffing around. And with the results of a pending toxicology results confirmed, Midori’s desire to find out who killed Mr. Major goes in to overdrive.

Can she find out the true killer, amidst all of the red herrings, and before the killer finds her?

Midori Bishop is a determined, young woman, who unfortunately is also too nosy for her own good, and can’t let things lie.

She seems to love a good puzzle, and what’s better to solve than a murder, even though her friends try everything to dissuade her.

Her personal relationship plays out though out the book as a side plot, but I was unsure how I felt about it. I can’t say that I enjoyed the relationship plot that much, and it was baffling at times.

I liked the way that the story is full of sub-plots and red herrings to throw you off the scent of the real killer, time and time again.

The book is more than just your usual detective-type book, with it’s musical and romantic elements running alongside the main plot, it felt different to other similar novels.

I didn’t realise that this book book was actually ‘part-two’ in a series, though it didn’t really matter, as this book worked as a standalone, just as well.

An enjoyable read, though I had worked a lot of the clues out along the way for myself, before they were revealed. 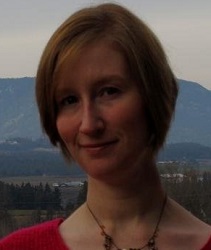 Sarah Fox was born and raised in Vancouver, British Columbia where she developed a love for mysteries at a young age.

When not writing novels or working as a legal writer she is often reading her way through a stack of books or spending time outdoors with her English Springer Spaniel.