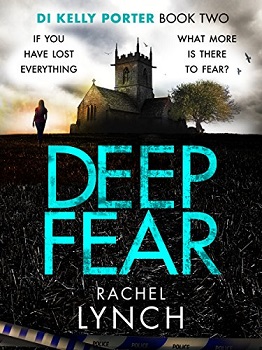 DI Kelly Porter is back. But will this new case push her beyond her limits?

On a peaceful summer’s morning in the Lake District, a woman’s body is discovered outside a church. She’s been murdered and a brutal, symbolic act performed on her corpse. DI Kelly Porter is in charge of the team investigating the crime, and is determined to bring the killer to justice. But as more deaths occur it is clear this is the work of a disturbed, dangerous and determined individual.

Can Kelly put the puzzle pieces together before the danger comes closer to home?

Rachel Lynch returns with her second book in the DI Kelly Porter series set in the Lake District.

This time Detective Inspector Kelly Porter is on the case of a serial killer who is murdering people because of bad things that they have done in their lives. He is also placing their bodies in different areas of the Lake District with certain parts missing and a note inside each body quoting lines of poetry.

The first victim is found in a graveyard by an elderly gentleman visiting his wife’s grave. Moira Tate’s naked body is found in a precarious position with rolled-up money placed inside of her and the tops of her fingers cut off. She had come to the are to visit her sick mother who was at the local hospital.

It’s up to Kelly and her team, including newcomer DC Shawcross to work out the clues and catch their killer before he/she strikes again, but with little to go on, this is going to be a tough case to crack, and one that feels too close to home!

I absolutely loved book one, Dark Game, so much so that I read it through the night, unable to put it down, so I couldn’t wait to get started on this book. DI Kelly Porter is one tough cookie. She won’t let anything or anyone stand in her way to get the job completed and catch her suspects.

I love how the books are set in the Lake District, one of the most beautiful parts of the UK, and Ms. Lynch brings the area to life with her descriptions, making the whole book atmospheric.

However, whilst I loved the plot surrounding the murders and the ritual placing of the bodies and the investigation into them, I thought there was a little bit too much about DI Kelly herself and her family situation. Her sick mother, a sister she detests. Whilst both were touched on in the first book, they kind of took over a few of the chapters in this one. I ended up glossing over some of the sections just to get back to the case at hand.

I enjoyed the build-up of the case, the plot twists as you wonder which suspect is the real culprit and the joy of the chase as the pieces are all put together and the puzzle comes to a close, this is what makes a great thriller.

The book is still engaging though and has a great plot, I just wasn’t as gripped to the story as much as I was with the first book, which was a real shame. I’m hoping that book three, which I will certainly read, is as good as the first.

Rachel Lynch grew up in Cumbria and the lakes and fells are never far away from her. London pulled her away to teach History and marry an Army Officer, whom she followed around the globe for thirteen years.

A change of career after children led to personal training and sports therapy, but writing was always the overwhelming force driving the future. The human capacity for compassion as well as its descent into the brutal and murky world of crime are fundamental to her work.