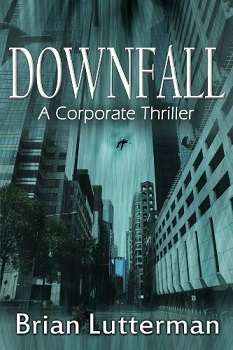 Paraplegic young attorney Pen Wilkinson is putting her life back together after a tragic accident, working for a large bank in a faraway city. She soon begins to suspect that the job and the company are not what they seem to be, and suddenly she is thrust into a nightmare.

Unbelievably, her employer and the media accuse Pen of fraud and wrongdoing, creating a scandal that threatens to bring down her company. Fired from her job, alone, and dodging attempts on her life, Pen uncovers a string of sophisticated, deadly corporate sabotage incidents.

Her search for the unseen saboteurs who destroyed her life takes her across the country, reaching a terrifying climax, as she finally confronts the real force behind the plot called Downfall.

Downfall is the first book in a series about Pen Wilkinson, an attorney and paraplegic. After her accident which killed her niece and made Pen a paraplegic, she found a Job at North Central Bank. She doesn’t really enjoy her job, but Pen is an accurate and determined person and she is doing her work especially well and is content about it. That is until she is made responsible for a mistake which ends in a major crisis for North Central and the murders of former employees.

After the killer attempted to end her life too, Pen is even more determined to find out who is responsible for all of this mess. She runs into James Carter, the former CEO of North Central who has also been made a scapegoat for the crisis. They decide to work on finding out the truth together.

Everything looks like a well-played plot with current and former employees involved, with money being a major part as well. But who is behind all this mess? Who has brought those people together and made them break the law only for revenge? More so, who is behind the killings?

Downfall is the first book in the Pen Wilkinson Series and the second in the series I have read. My last review was for Nightfall, book four. I liked it so much that I wanted to read another book from the series. It was also fine to read the books out of order.

The author didn’t let me down. Downfall is as gripping and entertaining as Nightfall. I got to know Pen Wilkinson in Nightfall and very much warmed to her character. After having read the first book of the series I find that the character has grown in a good way. Pen is a strong and tough woman and I often forgot her sitting in a wheelchair. The author knows how to involve the everyday problems of a paraplegic into a great story without over boarding the plot.

I like the writing style of Mr. Lutterman. It is engrossing and makes it easy to fly through the pages, sinking into the book like watching a movie. The plot is great and leaves nothing to complain about. If you are a fan of John Grisham books you are most certainly going to like the Pen Wilkinson Series.

I am going to purchase the other two books from the series (Windfall and Freefall) and enjoy the lasting holidays while learning more about Pen.

Brian Lutterman is the author of the mystery-thrillers Bound to Die, a Minnesota Book Award runner-up, and Poised to Kill, described by the Midwest Book Review as “. . .a masterfully woven tale of tycoons and terrorists.”

Lutterman, a former trial lawyer and corporate attorney, writes cutting-edge corporate thrillers, bringing to life the genre’s outsized conflicts and characters. A graduate of the University of Minnesota and Georgetown University Law Center, he lives with his family in the Twin Cities.