Drifting in the Push by Daniel Garrison – Book Review

Drifting in the Push by Daniel Garrison – Book Review 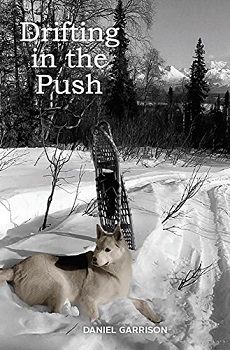 Drifting in the Push

Drifting in the Push is a fast-paced, comical romp that takes the reader on a journey through the unintentional adventures of one man’s reality. From the Rocky Mountains to the Pacific Ocean, from Mexico to Alaska, missteps, stubborn obstacles, and fate are his constant companions, along with an offbeat assortment of entertaining characters.

From time to time, his escapades include his two childhood friends—Bryan, who follows him to the unforgiving Arctic, and Shane, who steers him down an unpleasant alley or two. Amid this craziness, he picks up another friend—Hank, his devoted dog.

This chronological series of interdependent short stories will take you from fear to love, amusement to surprise, and it just might occasionally leave a tear in your eye.

Picture the scene. You have spent a convivial evening in the company of a raconteur telling you funny little stories from his life. Possibly accompanied by good food and wine, you have thoroughly enjoyed the time which you end with those familiar words. “You must write a book about all your exploits”.   If such a suggestion caused the birth of this book then the person who delivered the line has a lot to answer for.

Garrison’s writing has a competence that befits his college qualifications. His text is easy to follow and I found myself through the book in no time. It is more “gentle and amusing” than the “fast-paced, comical romp” that we were promised but that can be acceptable.

However, I was left asking myself what Drifting in the Push was all about.  There is little storyline. The book is semi-autobiographical, covering the first 30 years or so of a young man’s life and told through a series of short, sometimes mildly amusing short stories.  What disappointed me was the dullness of many of these stories. Agreed, many of us have not worked in arctic seas or have camped in remote areas but so much of this was everyday events that have either happened to ourselves or to close friends. I don’t want to give too many spoilers but what child hasn’t fallen off their bike, lost a pet through an accident or had a bike stolen?  Yes, such details woven into a novel can embellish a tale but without an overall plot they provide weak entertainment.

The action gets a little more serious towards the end of the book and I enjoyed learning more about life in Alaska, particularly the vastness of the place.

During his travels Daniel meets a number of characters but none that we get to know in any great depth. Indeed, how much do we really know about Daniel? Do we really understand why his life took the turns it did instead of following the expected paths? He has a few pals but no serious relationships.  Sorry, it’s all a bit thin.

If you are keen for a gentle, easy read then you could try Drifting in the Push. I have awarded three stars.

Unintentionally, Daniel Garrison has led a bit of an adventurous life. It was never his desire to do so, as he would much prefer a more placid, settled existence, yet fate has always had other plans for him. Through the years, Daniel, who holds a degree in journalism, chronicled many of his stranger experiences, along with some of the more eccentric characters he met.

Recently, he undertook a journey of a different sort—he decided to forge his stories into a book. Drifting in the Push, the first of two books in the series, is now available worldwide, so if you’d like to know more about the author, pick up a copy.