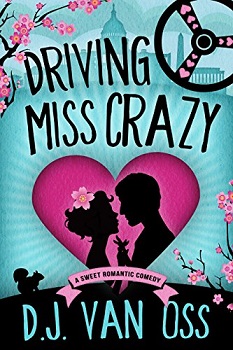 He’s got a car. She’s got places to be. If only things were that simple.

Maggie MacNally always falls short, no matter what she does. Whether it’s her career or her love life, nothing ever ends up right, and even as she tries to put her work mishaps and dating missteps behind her to forge a new life in Washington DC, she wonders: is she really heading where she wants to go, or simply following in the family footsteps?

But just as she’s considering packing it all in, an out-of-the-blue proposal from her influential grandmother offers her one last chance at success — a chance which puts her in the path of beguiling and mysterious French diplomat, Valery.

Meanwhile, diplomatic driver and widowed father Adrian Adams isn’t looking to change anything about his life, he just wants to keep his seven-year-old daughter Charlie safe and happy. The last thing on his mind is finding love again – and the last thing he expects is to suddenly lose his job. Luckily, he’s soon got a new assignment, one which brings him face to face with an overworked, stressed-out, but oddly charming Irish girl with a penchant for talking to squirrels: Maggie.

It’s not long before Adrian finds himself, unwittingly, falling in love again. Will Maggie seize the life she’s always yearned for, or be left with the pieces of yet another broken dream? And will Adrian take a second, crazy chance at love, or just play it safe? And what’s with all the squirrels?

I must admit that I had a few preconceptions on choosing Driving Miss Crazy, the debut novel from D. J. Van Oss. At first glance, I couldn’t help but think it would be another stereotypical boy-meets-girl and they lived happily ever after affair. Of course, it wouldn’t be a ‘rom-com’ without this inevitable plot line running through, but what Van Oss does particularly well is take all these traditional tropes, explore them, then satirise them.

Although we are served the boy-meets-girl story and the happy ending – with a side of fantasy, deception and the impossible pursuit of perfection – he deviates from convention by creating two characters that are rather fleshed out with complex back-stories, hopes and desires.

As the novel begins, we meet Adrian Adams, the widowed diplomatic driver, who is quite literally driving his 7-year-old daughter Charlie crazy with his over-protection. It all begins to go wrong for him in a matter of pages, starting with the loss of his job. He also feels the pressure from his brother to start dating again after the loss of his wife, Karen, who he significantly associates with cherry blossoms (more on that one later). We then meet Maggie MacNally, the self-conscious and rebellious young Irishwoman from a long line of top politicians, who feels a great deal of expectation to follow suit.

So here’s where our first trope comes into play. A rom-com wouldn’t be a rom-com without the inevitably cringe-worthy and awkward meeting of boy and girl. As fate would have it, Maggie is given the opportunity to work for her grandmother, the formidable Ambassador of the Irish Embassy in the US, and needs a driver. Step in Adrian. So far, so rom-com. Maggie and Adrian’s first encounter is laced with tension, misunderstandings and spilt tea on Adrian’s tie and trousers. We witness each eyeing up the other, clearly pleased with what they see, which makes the moment when Maggie literally bumps into Adrian and sends her drink flying over him all the more painful. What’s more, at this point they don’t know that they’re about to become driver and passenger. Great first impression!

As time drives on, Maggie meets Charlie, Adrian’s daughter, who is currently rehearsing for her school’s production of Snow White. The fantasy and mirroring elements go one step further here. We learn that Maggie actually played Cinderella in her own school days, and this seems to echo the plot she’s found herself in now: she’s been given all the tools to become a princess of the Embassy, preparing for the Gala alongside ‘Prince’ Valéry, but knows she doesn’t belong there.

Throughout the novel, Maggie has been chasing her idea of perfection, assuming that it lies in a career that she doesn’t really enjoy, with a man who she doesn’t feel herself around. Introduce the Queen and it’s a delightfully crazy plot that pays homage to the craziness of Maggie herself. So much so, it’s not really a surprise when the evening is somewhat disturbed by the ill-timed appearance of a squirrel. This is when Van Oss begins to let them live happily ever after…

Driving Miss Crazy is a satisfyingly sweet read with a wrapped-up morally-sound happy ending, as Adrian and Maggie learn that their imperfections and ability to be themselves together are what make them perfect for each other. It’s also extremely funny – where else would a squirrel wreak havoc at a Gala attended by the Queen of England?

If you’re after a read that takes a well-known and well-loved genre and runs away with it with a fantastically crazy plot, I recommend giving Driving Miss Crazy a go!

MAGGIE WAS STARTING TO GET A LITTLE WORRIED that she wasn’t going to make it to the embassy on time. She made a mental note to call this whatever-service-it-was and let them know they needed to get some responsible drivers or lose her grandmother’s business.

She was walking down the street, scanning for anyone who looked like they might be a driver when the guy she’d spilled her tea on walked past her, still dabbing at his pants.

“Excuse me,” she said. “Hi again…do you—I’m waiting for a driver —do you think this would be their car?” She pointed to a polished black sedan at the curb.

Maggie was a little annoyed at his unhelpful answer. “Yes, and he’s late, and I’m just wondering if you think this would be his car. It has a driving service logo thing on the side.” She pointed at the car door, which featured a silkscreened logo for Capital Transport.

Maggie frowned. “Look, I’m really sorry about the tie. It was an accident.”

Now he shook his head. “I didn’t realize who you were…in there.”

“Right, well, it’s just that today is—” She stopped and threw up her hands. “Look, I’m sorry if I bothered you.” She returned to searching up and down the sidewalk. “If he doesn’t get here soon, I’ll just take the thing myself,” she said to no one in particular as she glanced back down the street.

“If you do, make sure you don’t race the engine. BMWs have a tendency to overheat.”

“You’re…?”
He stuck out his hand. “Adrian Adams. I’m you’re driver. And you must be Miss MacNally?” 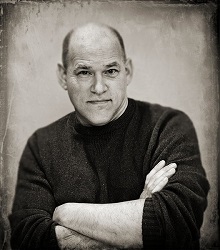 When not writing you can find him working in the yard, walking the dog, or staying up too late watching BBC mysteries while eating honey peanut butter straight out of the jar.

He lives in the country suburbs of Iowa with his wife and three step-daughters. His writing partner is Jack, a pretty-boy golden retriever who grunts when you rub his ears.