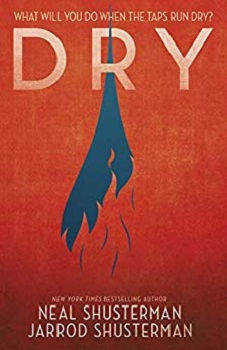 When the California drought escalates to catastrophic proportions, one teen is forced to make life and death decisions in this harrowing story of survival from New York Times bestselling author Neal Shusterman and Jarrod Shusterman.

The drought – or the Tap-Out, as everyone calls it – has been going on for a while now. Everyone’s lives have become an endless list of don’ts: don’t water the lawn, don’t fill up your pool, don’t take long showers.

Until the taps run dry.

Suddenly, Alyssa’s quiet suburban street spirals into a warzone of desperation; neighbours and families turned against each other on the hunt for water. And when her parents don’t return and her life – and the life of her brother – is threatened, Alyssa has to make impossible choices if she’s going to survive.

This is a really well written title with a rock solid premise – California has run out of water. Everyone sort-of knew it was coming but was sure that there would be some plans in place to make sure that nobody would suffer once the taps stopped working, this was their biggest mistake.

The story follows to lives of a group of kids from very different backgrounds and how they cope in this disaster. Alyssa and her brother, Garett, are from a normal suburban household and weren’t prepared for this at all but they adapt well to the situation while Kelton, their next door neighbour is from a doomsday prepping family. In their search for safety and water, they meet a couple of other teens who I felt weren’t as well developed as characters so I struggled to sympathise with them.

The book flips perspectives between the characters, which is something I love – seeing the same story through the eyes of everyone involved.

I enjoyed the first 2/3 of this book much more than the ending, I would have much rather there had be a sequel and the story ended in a more satisfying way than the current ending that I felt was a bit rushed and left too many loose ends. That said, I have read other books by the author Neal Shusterman and hold him to a very high standard so I might just be being picky here…

Jarrod Shusterman is the author of the short story “UnDevoured” in bestselling UnBound. He writes for film and television, and his talents extend to directing films and commercials. He was the story producer on the television movie Zedd—Moment of Clarity, and he and his father Neal Shusterman are adapting Dry for the screen. Jarrod lives in Los Angeles but enjoys traveling internationally, and is currently studying Spanish.