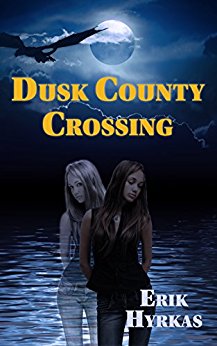 Morgan’s biggest problem is high school gossip mongers, until the curse. She never wanted to become a sorceress or travel to other worlds.

Trading one memory at a time to save her friends, Morgan is forgetting who she is and where she came from. Dragons and wizards are the beginning of the adventure waiting for her.

I rather enjoyed the beginning and the promise of an unusual adventure to come as Morgan, a sixteen year old student, is somehow transported through a portal to another world with ‘Leigh’.

I particularly like the cover design which is a very accurate depiction of the two main characters. We see the action from the perspectives of them both in the first person as they search for a way home before Morgan’s memories completely vanish.

I don’t think it’s a good idea to over-think this story as a lot of the plot is based on rather vague concepts regarding energy sources and magical abilities. It follows a familiar theme of good versus evil but to the author’s credit, certainly doesn’t rely on excessive gore or violence.

This is a light-hearted read which may well appeal to its target audience. For me, after an intriguing start, it flagged a bit in the middle but perked up at the end, leaving the way open for another instalment.

I think this author had some good ideas which perhaps needed a little more polish and a few additional twists to elevate his work above the crowd in this highly competitive genre. I’ll be interested to see where he takes his characters from here.

His hobbies include flying small planes, camping, hunting, fishing, and playing massively multiplayer online role-playing games on Friday nights. He was raised in Ely, Minnesota and went to college in Duluth.