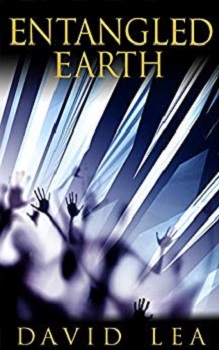 When a failed experiment causes a parallel world to collide with ours, the invisible reality begins to tear our world apart.

Physicist Mia Green finds herself stuck in Paris, in the middle of an unnatural disaster and she’s the only one who knows what needs to be done; Mia must get home to England and stop the experiment that’s ending the world.

Reality has crumbled to an ephemeral and unpredictable puzzle, filled with danger and destruction, and amid this chaos, it will take everything that Mia has to fix the splintered worlds.

Entangled Earth is a mind-bending science fiction adventure where everyday activities on another invisible world suddenly become a deadly threat to our world.

It’s not often that I find myself reading a book about parallel worlds and theoretical physics (this is the first time!), so I wasn’t sure what I was letting myself in for.

The idea behind the story is original and fascinating – a scientific experiment yields unexpected and disastrous results; a parallel universe has settled in on top the universe our main characters inhabit and the way the worlds interact has resulted in mass casualties.

A group of survivors work together with the knowledge that they have to go to Cambridge, where the experiment began, to shut it down and save the world. The journey itself is full of action and danger, which kept me hooked.

The issue I did find with this book is that as it’s only 183 pages long, the author did have to dedicate a large portion of the book to explaining the scientific concept as well as the visuals of what two intersecting dimensions would look like (it’s confusing as heck to begin with but I rolled with it until it made sense), at the expense of character development. The four main characters were likable enough but without any real depth to them – I would have been happy to see a full-length novel with a bit more padding to it in this regard.

If you’re looking for a challenging but enjoyable read to stimulate those little grey cells – this is the one for you!

David Lea was born in Manchester in the United Kingdom in 1977. He grew up in Cheshire, not including a year in Washington DC as an impressionable 7 year old. In his 20’s David moved to London where he spent 10 years as a Forensic Scientist before moving into Business Analysis. He now lives in West Sussex.

David’s first novel was Entangled Earth, an apocalyptic thriller, released in mid-2018. His next novel, Under Three Skies, is currently in progress.