Today we welcome author Daniel M Jones onto the blog with his guest post, The Eternal Student, as part of the blog tour for his new book, ‘Become the Force: 9 Lessons on How to Live as a Jediist Master’ that he wrote with author Theresa Cheung.

Daniel M. Jones aka Morda Hehol is a philosopher, scientist and musician. In 2007 he became world famous when he founded the Church of Jediism at the age of twenty one. Since then he has appeared in many national newspapers and Time magazine, and has been interviewed by the BBC, Good Morning America, ITN and numerous other TV and radio stations.

Daniel also has a degree in Chemistry from the University of Bangor, Wales. He is a member of pop punk band Straight Jacket Legends, whose debut album charted in Japan. He also dedicates his time to his the Aspie World YouTube Channel highlighting what life is like with Aspergers, after having been diagnosed in 2013. For more information please visit: www.thechurchofjediism.org

From as early as I can remember I’ve wanted to know the meaning of life. I’ve never been satisfied with being told that this is just the way things are or that we simply can’t understand why we are here. The eternal student in me has always refused to accept that anything in this life is a closed book. No book stays closed as far as I am concerned. I find a way to open it, even if that book is the book of life itself. But, I can hear you thinking, who is this guy? Who is Daniel Morgan Jones? Why at the age of 21 did he found the Church of Jediism?

Well, I’m from a galaxy not so far away: Holyhead, the largest town in the county of Anglesey in Wales, to be precise! I am no different from you or anyone else in the universe, no better and no worse. I’m part of the eternal living force that pulses through all of us. However, I am also a Jediist Master and founding head of the Church of Jediism. Google my name and you are likely to find a ‘hero’ with many faces: Jediist Master. Musician. Star Wars nerd. YouTuber. Asperger’s sufferer. Big kid.

Okay. I admit it. I am all those things and the critics may have a point about the big kid bit. All children, except me, grow up. Absolutely impossible to deny. I live for and love Star Wars. I have a fine collection of lightsabers and Star Wars memorabilia. I’m childlike in my terminal curiosity. I see the world around me as one of infinite possibility. I hadn’t even started primary school when I watched Star Wars for the first time. It was love at first sight. I was mesmerised by Luke Skywalker’s transformation from a meek boy into a determined and confident Jedi knight and my first thoughts were: ‘Wouldn’t it be cool if I could become the Force.’

From then on I had the movies on endless repeat, watching them both before and after school. I couldn’t get enough of it. I collected all the literature and toys and memorabilia. It would not be an understatement to say Star Wars was absolutely everything to me. To this day I can quote almost every scene of the original three movies (Episodes IV to VI) word for word. My mind perpetually buzzes with thoughts, ideas and insights not just about Star Wars but about countless things and always there is that urgent need to find meaning, purpose and order.

From the age of 12 onward I studied just about every religious, spiritual or esoteric movement I could, from major ones, like Buddhism, to specialist ones, like Scientology, to esoteric societies, like the Freemasons. Everything that promised answers to the meaning of our existence I analysed in depth and filed what was relevant away in my mind. I began to see very clearly that all these movements were pointing in the same direction. In different ways and using different names they all talked about an all-powerful eternal life energy that sustained us and how our relationship to that energy or power shaped our destinies.

I immediately sensed a resonance with the Force in the Star Wars movies. I could see that the Force was chi, spirit, prana or the part of you that is separate from your mind and body. I could see it’s potential to form the basis of a new movement that offered the possibility of unity regardless of religion, gender, race and culture. This realisation coupled with the 2001 Jedi census phenomenon when hundreds of thousands of people in an act of rebellion against government defined categories put ‘Jedi knight’ down as their religion was the beginning of my determination to found the church of Jediism in 2007. 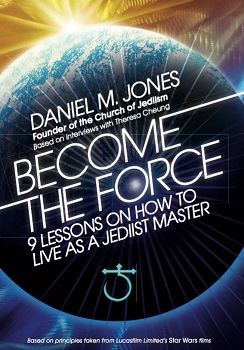 Daniel M Jones founded the Church of Jediism in 2007, and it now has over 500,000 members around the world. This is the book his fans have been waiting for. In it Daniel outlines the Jedi perspective and provides practical tools for anyone interested in gaining a deeper understanding of how to use the Force in everyday life.

The Force is a metaphor for the universal life energy that connects us all, and it can be both light and dark, good and bad. Now, more than ever, it is our responsibility to overcome the dark side. This book does not aim to convert but to inspire its readers to live a life of meaning and purpose according to the universal spiritual teachings from ‘The Way of the Jedi’.

– Daniel’s own fascinating spiritual journey and how overcoming personal struggles has awakened him to his purpose.
– How Jedi teachings can empower mind, body, heart and spirit.
– A comprehensive toolkit that will allow anyone to genuinely embrace ‘the way of the Jedi’.
– Compelling reasons why the spiritual teachings of Jediism are relevant today.
– A comprehensive explanation of Jediism as a spiritual movement (a universal desire for self-awareness, spiritual awakening, peace, love and harmony) rather than a religion.
– Shows that it’s plausible that the Jedi-minded among us today might usher in a new spirituality and shift in global consciousness towards peace and harmony that is more powerful than any we can possibly imagine. 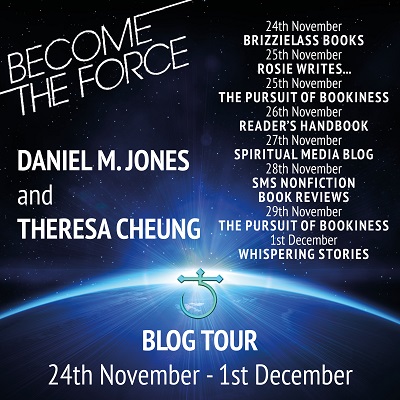