The Ferret, The Donkey and Snakesbelly by Brian Amos – Book Review

The Ferret, The Donkey and Snakesbelly by Brian Amos – Book Review 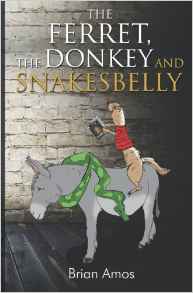 Derek Rafferty’s brother-in-law, Dean, has been sent to prison. He is mid-forties, respectable, married for twenty-five years with three grown-up kids and never before been in trouble with the law. As an ex-copper, Rafferty needs to find out how this has happened.

Whilst visiting his sister during Dean’s absence he comes across some evidence that all is not as it has appeared. He decides to carry out his own investigation and, not wanting to rely on the traditional justice system with which he has lost faith, proceeds to act as prosecutor, jury and judge.

The Ferret, The Donkey and Snakesbelly, is a crime and mystery book that follows the lives of three individuals all connected through an act of crime.

One thing I must firstly note – I do not personally think the blurb accurately represents the story. Derek Rafferty, who one would assume to be the protagonist from the blurb, is in fact not even introduced into the story until about half way through the book. The book concentrates more on Paul, Dean and Ernest (The Ferret, The Donkey and Snakesbelly respectively), thus I personally would have preferred a blurb noting their part within the story.

The plot was, at first, a little confusing – there were some individuals introduced who weren’t in my opinion important to the story-line. As I got further and further into the book I did begin enjoy the plot – I think it was a great idea for a book and is very unique. However, I did find the story moved on too quickly and lacked the depth and detail that I love in crime and mystery novels. I would have loved the actual crime to have been developed further rather than happening over just a couple of chapters.

I also, personally, didn’t enjoy the attitude towards prison from the book. Don’t get me wrong – I’ve never been to prison so don’t have a clue what it is truly like, however, I just found those chapters uncomfortable. I couldn’t make my mind up if prison was being portrayed in a more negative or positive light, but I did just have a sense of unease whilst reading these chapters, as it didn’t feel realistic to me.

The book itself is very unique – at the end of most chapters is a short poem, which acts almost as a little recap for the chapter and is upbeat and humorous. At first I found these funny and refreshing, however as the poems started creeping in more regularly – even in the middle of some chapters – I started to find them unnecessary. I also found that some of the language used in the poems wasn’t very pleasant, which wasn’t to my personal taste.

Whilst I can normally overlook the odd spelling or grammatical error, as even the most famous of books can have one or two slip by, I must unfortunately say that this book has the most errors I’ve ever noted within a book. Whilst it isn’t riddled with typos, it was definitely just about pushing into double figures.

Overall, whilst I think the plot is a great idea and the book has real potential, I am going to have to give this a 2/5. I struggled with many chapters, wasn’t emotionally attached to any of the characters, and did find I had to push myself to continue reading. Unfortunately I most probably wouldn’t read this book again.

Dave Henshaw (writing under the pen name Brian Amos) was born and raised in Stapleford, a small town between Derby and Nottingham in the East Midlands.

He attended Albany Junior School, then Bramcote Hills Grammar before moving to Devon in 1982, to study Fishery Science at Plymouth polytechnic.

His first job after gaining a BSc. (Hons) degree was on a fish farm in Inveraray, a beautiful little village on Loch Fyne, in the west of Scotland. Here he met his future wife, Jacqui.

Dave and Jacqui moved back down to Nottingham where they live today. They have three grown-up children, Stephen, Leigh and Kayleigh, and one grandchild, Daniel Jack.