Today on the blog we welcome author Fiona Veitch Smith, with her guest post ‘Fiction Imitating Art: Vanessa Bell & the Pitmen Painters‘, as part of the blog tour for her new book ‘The Art Fiasco’ which was released on 23rd October 2020. Keep scrolling down to enter the giveaway at the bottom of the page too. This post contains affiliate links.

Fiona Veitch Smith is the author of the Poppy Denby Investigates novels, Golden Age-style murder mysteries set in the 1920s, about a reporter sleuth who works for a London tabloid. The first book in the series, The Jazz Files, was shortlisted for the CWA Historical Dagger, while subsequent books have been shortlisted for the Foreword Review Mystery Novel of the Year and the People’s Book Prize.

She is formerly a journalist, having worked on the arts and crime beats of a Cape Town newspaper, and lectured in journalism in the UK for over a decade. She is currently the Deputy Editor of the CWA’s Red Herrings Magazine.

The Art Fiasco, the fifth book in the Poppy Denby Investigates series, sees the 1920’s most stylish reporter sleuth, searching for the killer of a world-renowned artist. People often ask me if I base my characters on real people, and sometimes the answer is yes, and sometimes no. In the case of the artist Agnes Robson, the answer is yes and no. When I decided to have an artist as the victim in my story, who dies at the beautiful Laing Art Gallery in Newcastle upon Tyne in 1924, I knew I needed to do some research into female artists of the 1920s.

However, there was a complication: Agnes, the daughter of a miner, came from a working-class background and I could find no real-life role models of female artists from this social stratum at the time. However, there were some other role models I could draw on. Agnes comes from Ashington, a mining village north of Newcastle, which is famous for a group of artists in the 1930s and ‘40s who either were or had been miners – the most famous of them was probably Norman Cornish. They became known as the Ashington Group or The Pitmen Painters (inspiration for the Lee Hall play) but were, as far as I know, entirely male.

They initially worked with a tutor from Durham University called Robert Lyon, but they soon outgrew the course material and he suggested they start producing their own work. In 1936 they put on an exhibition at the Hatton Gallery in Armstrong College, which now forms part of the modern Newcastle University. This gave me the idea to have a tutor from Armstrong College travel to Ashington in my story and start art courses for the children of miners. It is here that the teacher Michael Brownley meets the very talented young Agnes Robson.

I now had my working-class inspiration for Agnes, but he was the wrong gender and the wrong period. I had to turn elsewhere to flesh out my female artist. In the summer of 2019, in those halcyon pre-Covid days, my daughter and I went to London to take in a few exhibitions. One of them was the Vang Gogh exhibition at the Tate Britain that focuses on his years in London and his later influence on the British artists of the early 20th Century. The artists of the Bloomsbury Group were particularly taken by him, including the art critic Clive Bell and his wife Vanessa, sister of Virginia Woolf. Also influenced by Van Gogh were two of Vanessa’s lovers: Roger Fry and Duncan Grant, the latter of whom Vanessa lived with and together had a child.

Vanessa Bell’s art really spoke to me and I imagined my Agnes painting in a similar style. The passages in the book where I describe Agnes’ work are drawn from my experience of Vanessa’s paintings. However, while Norman Cornish was too male, Vanessa Bell was too upper middle-class. Agnes was neither of these things, although, without giving too much away from the story, she peripherally becomes part of the Bloomsbury Group. And although Agnes has a complicated personal life of her own, I decided not to mimic the free love, bisexual nature of Vanessa’s life. This was not out of any prudery on my part, but it was not who I felt Agnes would grow up to be. In fact, one of the themes of the book is the difference between how working-class women who have sex outside of wedlock are treated compared to upper middle-class women, who can buy a certain immunity from societal censure.

So, while there are echoes of Norman Cornish and Vanessa Bell in my character of Agnes, in the end she is her own woman, which is how it really should be. 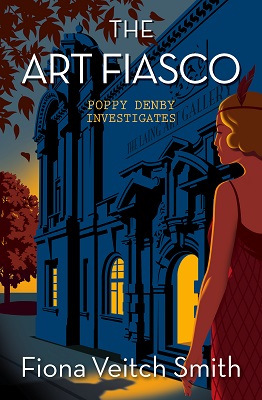 It’s 1924 and Poppy Denby is heading up to Northumberland to celebrate her father’s sixtieth birthday. She stops off in Newcastle en route to visit her Aunt Dot, who has temporarily relocated from London to renovate a house she’s inherited. One of Aunt Dot’s guests is the world-renowned artist, Agnes Robson, who is staging an exhibition at the Laing Art Gallery.

Reluctantly, Poppy is roped in to help when the artist’s press liaison man falls ill. She soon discovers that the local press has dug up some dirt on Agnes relating to the tragic death of a young art teacher in Ashington Colliery, twenty-seven years earlier. As she tries to suppress the story, Poppy begins to suspect that the teacher might have been murdered and that the killer may still be on the loose… 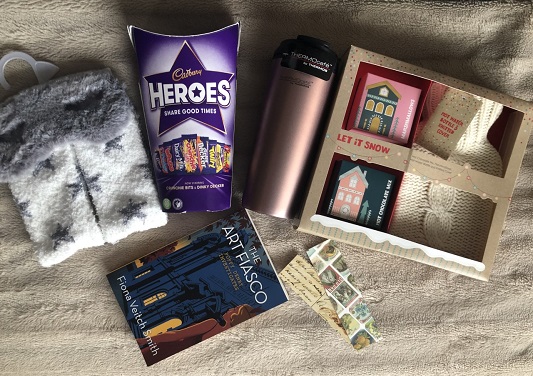 To celebrate the release of ‘The Art Fiasco’ by Fiona Veitch Smith, I have one paperback copy to give away, as well as some fab goodies to go along with it. For you chance to win this amazing prize enter via the Rafflecopter widget below. Sorry the giveaway is only open to UK residents.

Competition begins on 26th October 2020 and ends on the 2nd November 2020. For full Ts&Cs see the Rafflecopter widget.