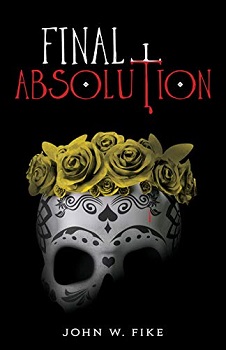 Growing up during the tumultuous ’60s, John and Dave are your typical 17-year-olds: They’re focused on girls, senior year angst, and money. To get a few bucks in their pockets, they set pins at a bowling alley outside Detroit. When the bowling alley’s owner suddenly dies, their paths diverge.

John learns that their late boss, Carmen, left funds in a trust for John to use for college. As Dave grows bitter about Carmen overlooking him in his will, Dave settles into a job of delivering drugs, in spite of his growing fear of being caught. But what can he do? Drug dealing is bringing in big money for Dave. The kind of money he was deprived of for most of his life.

And then, in an instant, it all changes. Dave’s sense of foreboding begins to become reality—but a much darker reality than being arrested for drug dealing. He is forced to do the unthinkable, and with that, there is no turning back for anyone.

I enjoyed reading Final Absolution but it has left me somewhat puzzled.

Firstly let’s look at the positives. It was easy to read, it kept my interest and I finished it within a few days. Most of the characters were believable, albeit a little twee in places. These are all measures of a good book. Furthermore it was interesting to learn about ten pin bowling manual pinsetter boys as I had naively never considered that there had been bowling alleys without machines to clear away and reset the pins.

Although John W. Fike’s storyline follows well-trodden themes it moves along nicely with some moral messages. The final few pages are unexpected and they provide an opening for a sequel.

So far so good but there are a few negatives. In particular I was unsure of the author’s target audience? The simplicity of the written English, the storyline and the morality themes all suggest it is aimed at the youth market but if so, wouldn’t it be more appropriate to set it in modern times? After all, our media is currently full of stories about drug dealing and gang warfare.

Maybe the author is trying to compare the problems of the 1960s with today. Alternatively he could just be aiming some nostalgia at the older reader.

While I am on the subject of simplicity, literature has given us colourful names such as Atticus Finch, Hermione Granger and Rhett Butler, Fike gives us John and Dave. And one final grumble, the text that I received had no asterisks or double spacing to denote a scene break which led to confusion when unexpected characters appeared in the action.

In summary, I found Final Absolution readable but unrefined. I am not sure who I could recommend it to and I have awarded three and a half stars.