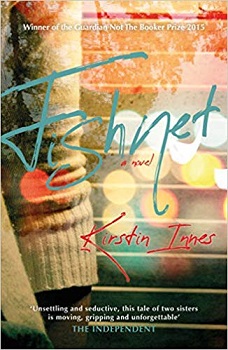 Twenty-year-old Rona Leonard walks out of her sister Fiona’s flat and disappears. Six years on, worn down by a tedious job, child care and the aching absence in her life, Fiona’s existence is blown apart by the revelation that, before she disappeared, Rona worked as a prostitute.

Determined to uncover the truth, Fiona embarks on a quest to investigate the industry that claimed her sister. Drawn into a complex world, Fiona’s life tilts on its axis as she makes shocking discoveries that challenge everything she’s ever believed …

Bittersweet, sensual and rich, Fishnet is a beautifully told story of love and grief, interwoven with a meticulous, controversial account of the sex industry and its workers. An outstanding piece of fiction, it questions the ways in which we perceive women, their interactions with the world and with each other.

It’s been six years since Fiona Leonard’s younger sister Rona arrived at her flat with her new baby daughter and then left leaving her child behind. No-one has seen or heard from her since and Fiona has been left bringing up her niece on her own as if she is her own child.

When the company she works for is involved in the demolition of an area of Edinburgh where prostitutes work from they start to kick up a fuss and protest outside her work. Having just discovered that her sister was working as a prostitute before she went missing, Fiona sets out on a course to befriend the girls and hopefully locate her sister.

Fishnet is an eye-opening book set in the world of prostitution surrounded by a story of love and devotion of one woman’s determination to find her little sister. The book is split into six sections as well as the opening and ending chapters labelled ‘Past’ and ‘Future’. The main section is called ‘Present’.

It took some getting used to at first the way the book was written, especially seen as the opening scene was written in the second person, a style of writing I will admit I really don’t like and I wasn’t sure what I was going to make of the book. However, the rest of the book (barring the last chapter) was written in the third person. Each section is also made up of alternating chapters, so section one alternates between ‘Village’ and ‘City’, section two ‘Back’ and ‘Forth’ and so on. It’s not a style I’ve come across before, but it really works to bring you in closer to the storyline, backstory and the characters.

As well as the chapters there are also blog posts from a sex-worker and messages from punters too. As I have said the book is eye-opening and not for the easily offended of those that don’t want to read about what the women in the book are paid to do as there are a few graphic scenes, but all in keeping with plot and I feel that they are needed to make the book feel authentic.

Fiona is a woman that comes across very mixed up. Her sister disappears without a trace, she has to bring up her niece and play mummy, which she is doing alone. Her parents don’t want to talk about their missing daughter, so she has no-one to turn to. She hates her job, her friends don’t understand her and being around the sex workers is showing her how strong and tough these women can be and she starts to look up to them and sees them as her ‘friends’, people she can turn to.

I am astounded at how easy to read it really was and how much I found myself engrossed within the pages. You can really tell how much passion and also research went into writing this book, it is exceptionally well-written. This is a rich and sensuous story that needed to be told and I’m so fortunate that I got the chance to review it.

Kirstin Innes is an award-winning journalist and arts worker who lives in the west of Scotland. Fishnet, her debut novel, was published in April 2015 by Freight, and won The Guardian Not The Booker Prize. Her short stories have been published in a number of anthologies and recorded for BBC Radio 4, and she’s had short plays performed at Tron Theatre and The Arches in Glasgow.

Her journalism has been published in The Independent, The Scotsman, Scotland on Sunday and The Herald, and she was assistant editor of The List magazine between 2006-2010. Kirstin won the Allen Wright Award for Excellence in Arts Journalism in 2007 and 2011.