Today on the blog we welcome author M J Lee, with his guest post ‘Five Things I’ve Learnt About Writing‘ as part of the blog tour for his latest book, ‘The Killing Time’, which was released on 23rd April 2018.

Martin has spent most of his adult life writing in one form or another. As a University researcher in history, he wrote pages of notes on reams of obscure topics. As a social worker with Vietnamese refugees, he wrote memoranda. And, as the creative director of an advertising agency, he has written print and press ads, tv commercials, short films and innumerable backs of cornflake packets and hotel websites.

When he’s not writing, he splits his time between the UK and Asia, taking pleasure in playing with his daughter, researching his family history, single-handedly solving the problem of the French wine lake and wishing he were George Clooney.

I’ve been published for nearly three years now. In that time, I’ve produced nine historical crime books going from the wild days of the Restoration to joy, gin and jazz of 1930s Shanghai.
Here’s a few things I’ve learnt along the way. Hopefully, if you’re thinking of being an author, they may inspire or scare the hell out of you.

1. Writers have to have a thick skin

Thicker than a Rhinoceros. And hairier. And greyer.

But you have to pick yourself and your pen up, and start again to wrestle with that blank page. Only you can write, nobody else can do it for you.

2. Fear of failure is not the most damaging emotion. Fear of success is.

Inside every writer is a voice that tells him or her, that they are not really good enough. That they are faking it. That one day the world will wake up and discover the truth – they can’t put two words together to make a coherent sentence. Like this.

Don’t worry though. I had lunch with a very famous writer last year. A man who’s written films and incredibly successful books. A man I’ve looked up to for the last twenty years. He said that he always felt he would be discovered as a charlatan one day. People would look at him and know he had no talent. Everybody feels this. It’s part of the insecurity of writers. Just write the best book you can and hang all the rest.

3. Marketing isn’t everything (but it’s a major part of any book)

Nobody will discover you by chance. They won’t log on to Amazon and suddenly decide I’m going to buy M J Lee’s book today. He seems such a nice chap and the book looks like it could be interesting. And I’m sure he wears terribly nice after shave.

NOBODY EVER DOES THIS.

There are over six million books on Amazon alone.

People won’t discover your writing unless you help them. Write the best book you can. Make sure the book cover is attractive. Get the blurb to be as enticing as it can be. And then start to market. Because, there’s no point in doing the first three if nobody reads your book.

Selling your book is part of being an author. Get with the programme.

4. ‘The only kind of writing is rewriting.’

I wish I thought of this but I didn’t. A scribbler called Ernest Hemingway said it first. He was a bit of bull in a china shop but not a bad writer, I’m sure you’ll agree. What he pointed out was a truth. A book gets better the more it is rewritten and edited. Rearrange the chapters. Rewrite that conversation. Start the whole thing differently. Change a character.
Until its finally published, a writer can do anything he or she wants with it to make the book better.

Ah, I hear you say, but when do you stop?

I have a simple test. I stop when I’m sick of seeing the words I’ve written. And then I give it one more edit.

Because, in the end, all writing is re-writing. Doing it well will make the reading so much better.

Like anything, writing is exercise; the more you do it, the better you get. I certainly feel that I’m a more proficient writer than I was two years ago.

But I never stop learning. I still read tips on how to be a better editor. I still look for ideas on making transitions smoother. I still research new ways to put meaning or emotion across in words.

One day, you will be published and enjoy that wonderful buzz when people say they enjoyed reading your book. Because the biggest thing I’ve learnt about being a writer is this one:

6. Dreams become real when you put them on paper.

That’s six things. Never mind. You’ll be a better writer if you break the rules. 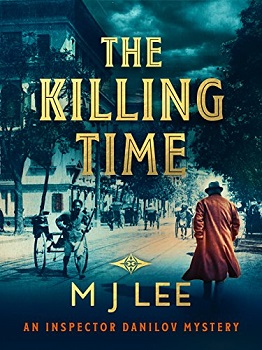 Shanghai 1932: Inspector Danilov hasn’t recovered from the death of his child… but across a Shanghai riven with communal tensions, children are going missing.

Missing, and then murdered. Who is responsible? Why have the children’s bodies been exhibited for all to see?

Just as Danilov thinks the stakes couldn’t be higher there is a new dimension, Japan, a rising power flexing its muscles. In fractious Shanghai, an explosion is long overdue. With the clock ticking can Danilov and his assistant Strachan solve the case? The fate of Shanghai may be at stake. So is Danilov’s job… And his sanity.

You can find out more about M J Lee by visiting the website/social media sites below.