The Largest library in the World

The Library of Congress, in Washington D.C, USA, is the largest library in the world. The library has so many items that it has to occupy three buildings. The Thomas Jefferson Building (this is the original, 1897), The John Adams Building (1938) and The James Madison Memorial Building (1981).

The library holds approximately 160 million items and requires at least 838 miles of shelving. It also has the largest collection of rare books in North America.

Included in the 160 million+ items are:- 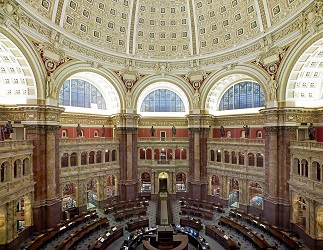 Nearly half of its book and serial collections are in languages other than English. The collections contain items in 470 different languages.

Fact – On a daily basis the library receives roughly 15,000 new items and adds around 12,000 extra to its collection – That’s some collection!

For more information visit – The Library of Congress