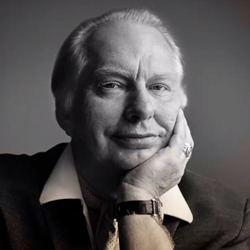 Author and founder of the Church of Scientology, L. Ron Hubbard was born in 1911 and died in 1986. His first work was published in February 1934 and his last in March 2006

Since his death in 1986, L. Ron Hubbard has been awarded four posthumous Guinness World Records.

The first, in March 2006, came ten years after his death. The award was for, ‘The author with the most published works’, standing at 1,084.

Shortly afterwards in September 2006, he was then recognised as, ‘The most translated author in the world’, with his books being translated in to 71 different languages.

In 2009, Hubbard then became the author with the most audio books with 185 of them.

Lastly in 2010 the record for, ‘The Most languages in to which the same book has been translated’, was award to Hubbard for his book ‘The Way to Happiness‘, which was translated in to 70 different languages.