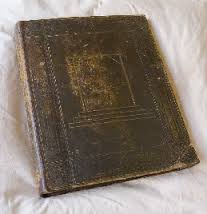 In 1821, eighteen-year-old John Horwood was convicted for the murder of his ex-girlfriend, Eliza Balsumbe. His punishment was to be hanged and his body to be given to Bristol Royal Infirmary for dissection classes. Two days later on the 13th April that sentence was carried out and he became the first person to be hanged at Bristol New Gaol prison.

After his death his body was sent to Dr. Richard Smith a surgeon at Bristol Royal Infirmary. Dr. Smith used the body in his public lectures, on dissecting. He also decided to remove Horwood’s skin and have it tanned.

What did he then do with the skin?

He made a book from it. He covered his case notes from the trial with the skin and then embossed the front with the words ‘Cutis Vera Johannis Horwood’ which means ‘The Actual Skin of John Horwood’.

The book is owned by Bristol Record’s Office and can be seen at M Shed Museum in Bristol.

The book however, is not a one off. The art of ‘Anthropodermic Bibliopegy’ (binding books in human skin), goes back many centuries and there have been numerous books bound this way, including other murderers skin.

The latest book to be discovered that it is covered in human skin was found at Harvard University’s Houghton Library, last year (2014).

The book, ‘Des Destinees de l’Ame’ (Destinies of the Soul) was written by Arsene Houssaye around 1880.

The story goes that Houssaye, a French novelist and poet gave the book to his friend Dr. Ludovic Bouland to carry out the binding using the skin of an unclaimed female mental patient, who had died of natural causes.

The book includes a note written by Dr. Bouland, which states that the book is:

“bound in human skin parchment on which no ornament has been stamped to preserve its elegance. By looking carefully you easily distinguish the pores of the skin. A book about the human soul deserved to have a human covering: I had kept this piece of human skin taken from the back of a woman“.