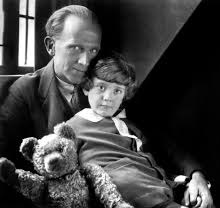 A.A. Milne based his character ‘Winnie-the-Pooh’, on a teddy bear owned by his son, Christopher Robin Milne.

Christopher Robin’s bear was originally named ‘Edward’ and made his first appearance in Punch Magazine on the 13th February 1924.

The article was a poem named ‘Teddy Bear’ which, later that year, was published in A.A. Milne’s first book of poetry ‘When We Were Young’, released in November 1924.

Edward was renamed Winnie by Christopher Robin, after he became very fond of a black bear with the same name at London Zoo. The ‘Pooh’ part of his name came from a swan he had met on his holidays.

The first time that Winnie-the-Pooh was named in a story, was in the 24th December 1925 issue of The Evening News, after they commissioned a Christmas story by A.A. Milne. 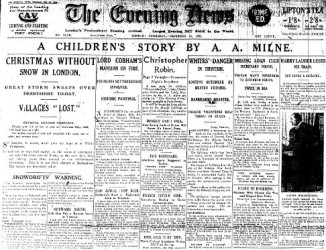 The story that was written in ‘The Evening News’, is the same one at the start of the book – ‘Winnie-the-Pooh’.

The hyphens in Pooh bears name are no longer present. They were removed by Disney when they bought the rights to the character.

A bear, however hard he tries,
Grows tubby without exercise.
Our Teddy Bear is short and fat
Which is not to be wondered at;
He gets what exercise he can
By falling off the ottoman,
But generally seems to lack
The energy to clamber back.
Now tubbiness is just the thing
Which gets a fellow wondering;
And Teddy worried lots about
The fact that he was rather stout.
He thought: “If only I were thin!
But how does anyone begin?”
He thought: “It really isn’﻿t fair
To grudge me exercise and air.”
For many weeks he pressed in vain
His nose against the window-pane,
And envied those who walked about
Reducing their unwanted stout.
None of the people he could see
“Is quite” (he said) “as fat as me!”
Then, with a still more moving sigh,
“I mean” (he said) “as fat as I!”
Now Teddy, as was only right,
Slept in the ottoman at night,
And with him crowded in as well
More animals than I can tell;
Not only these, but books and things,
Such as a kind relation brings—
Old tales of “Once upon a time,”
And history retold in rhyme.
One night it happened that he took
A peep at an old picture-book,
Wherein he came across by chance
The picture of a King of France
(A stoutish man) and, down below,
These words: “King Louis So and So,
Nicknamed﻿ ʻThe Handsome’﻿”! There he sat,
And (think of it!) the man was fat!
Our bear rejoiced like anything
To read about this famous King,
Nicknamed “The Handsome.” There he sat,
And certainly the man was fat.
Nicknamed “The Handsome.” Not a doubt
The man was definitely stout.
Why then, a bear (for all his tub)
Might yet be named “The Handsome Cub!”
“Might yet be named.” Or did he mean
That years ago he “might have been”?
For now he felt a slight misgiving:
“Is Louis So and So still living?
Fashions in beauty have a way
Of altering from day to day.
Is ʻHandsome Louis’﻿﻿ with us yet?
Unfortunately I forget.”
Next morning (nose to window-pane)
The doubt occurred to him again.
One question hammered in his head:
“Is he alive or is he dead?”
Thus, nose to pane, he pondered; but
The lattice window, loosely shut,
Swung open. With one startled “Oh!”
Our Teddy disappeared below.
There happened to be passing by
A plump man with a twinkling eye,
Who, seeing Teddy in the street,
Raised him politely to his feet,
And murmured kindly in his ear
Soft words of comfort and of cheer:
“Well, well!” “Allow me!” “Not at all.”
“Tut tut! A very nasty fall.”
Our teddy answered not a word;
It’﻿﻿﻿s doubtful if he even heard.
Our bear could only look and look:
The stout man in the picture-book!
That “handsome” King—could this be he,
This man of adiposity?
“Impossible,” he thought. “But still,
No harm in asking. Yes I will!”
“Are you,” he said, “by any chance
His Majesty the King of France?”
The other answered, “I am that,”
Bowed stiffly, and removed his hat;
Then said, “Excuse me,” with an air,
“But is it Mr. Edward Bear?”
And Teddy, bending very low,
Replied politely, “Even so!”
They stood beneath the window there,
The King and Mr. Edward Bear,
And, handsome, if a trifle fat,
Talked carelessly of this and that. . . .
Then said His Majesty, “Well, well,
I must get on,” and rang the bell.
“Your bear, I think,” he smiled. “Good-day!”
And turned, and went upon his way.
A bear, however hard he tries,
Grows tubby without exercise.
Our Teddy Bear is short and fat,
Which is not to be wondered at.
But do you think it worries him
To know that he is far from slim?
No, just the other way about—
He’﻿﻿﻿s proud of being short and stout.
Blog posts straight to email via Bloglovin – Like us on Facebook – Follow us on Twitter