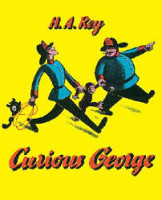 The children’s book ‘Curious George’, may never have been published due to the Nazi invasion of Paris during WWII.

In 1940, Curious George’s authors, Hans Augusto Rey and Margret Rey (husband and wife), were living in Paris in 1940 when the German Nazi’s were about to invade. They would most likely have been captured and possibly would have been killed, as they were Jewish, so Hans made them two bicycles from spare parts and they set off on the 14th June 1940 towards the Spanish border to escape. They only just missed the invasion by a few hours.

As they were travelling by bicycle they couldn’t carry much, so they took the basic items with them, along with five manuscripts, one being the manuscript for ‘Curious George’, which was published by Houghton Mifflin in 1941.

When the first book was released in the United Kingdom in 1941, George’s name was changed to ‘Zozo’, so as not to be disrespectful to King George VI, who was reigning at that time.

This isn’t the only interesting fact regarding Curious George. Before appearing in his own books, he appeared in Hans Augusto book, ‘Ragi et les 9 singes’ (Cecily G and the Nine Monkeys), however he wasn’t called George, he was originally called Fifi.