Today we welcome author Allie Cresswell on to the blog with an extract from her book, Game Show, as part of her week long blog tour. 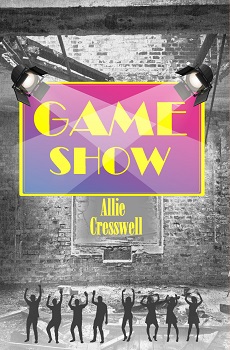 It is 1992, and in a Bosnian town a small family cowers in their basement. The Serbian militia is coming – an assorted rabble of malcontents given authority by a uniform and inflamed by the idea that they’re owed something, big-time, and the Bosnians are going to pay. When they get to the town they will ransack the houses, round up the men and rape the women. Who’s to stop them? Who’s to accuse them? Who will be left, to tell the tale?

Meanwhile, in a nondescript northern UK town a group of contestants make their way to the TV studios to take part in a radical new Game Show. There’s money to be won, and fun to be had. They’ll be able to throw off their inhibitions and do what they want because they’ll all be in disguise and no-one will ever know.

In a disturbing denouement, war and game meld into each other as action and consequence are divided, the words ‘blame’ and ‘fault’ have no meaning and impunity reigns.

Game Show asks whether the situation which fostered the Bosnian war, the genocide in Rwanda, the rise of so-called Islamic State in Syria and the ethnic cleansing in Myanmar could ever happen in the West. The answer will shock you.

The people in the besieged Bosnian towns never knew quite when the Serbian militia would come, but they knew that when they did, it would be terrifying. In this extract, ten year old Gustav has been asked to draw a picture while his mother (Majka) and grandmother (Baka) get ready for the inevitable arrival of the troops.

I have been writing stories since I could hold a pencil and by the time I was in Junior School I was writing copiously and sometimes almost legibly.

I did, however, manage a BA in English and Drama from Birmingham University and an MA in English from Queen Mary College, London. Marriage and motherhood put my writing career on hold for some years until 1992 when I began work on Game Show.

In the meantime I worked as a production manager for an educational publishing company, an educational resources copywriter, a bookkeeper for a small printing firm, and was the landlady of a country pub in Yorkshire, a small guest house in Cheshire and the proprietor of a group of boutique holiday cottages in Cumbria. Most recently I taught English Literature to Lifelong learners.

Nowadays I write as full-time as three grandchildren, a husband, two Cockapoos and a large garden will permit.